France’s motorhomes maker Trigano has announced a new motorhome, AKA camper AKA caravan. Not only did Trigano Group based the camper on a Ford Transit van when creating the Randger 560, but it also managed to get the blessing from the more-than-a-century old American automobile maker by the way of a new, extended five-year warranty offered with each motorhome customers registered from July 01, 2017. As a Transit-based camper, you can expect Ford’s intelligent All Wheel Drive and the company’s pride-and-joy, the eco-friendly 2.0L EcoBlue diesel unit, offered in a choice of 130 PS and 170 PS power outputs, paired to a six-speed manual gearbox.

The one good thing about getting the blessing from the manufacturer is, Trigano gets an edge of bespoke modifications not found on stock Transit vans. These modifications include relocated handbrake to facilitate ease of access between cabin and living space, a revised fuel and exhaust systems to accommodate the adapted Boyd, as well as an augmented power socket and power take-off systems. Not that other coachbuilders won’t do any similar modifications; they sometimes do, but they are usually executed after market, not by the automobile manufacturers who would have known the vehicle better than anyone else. 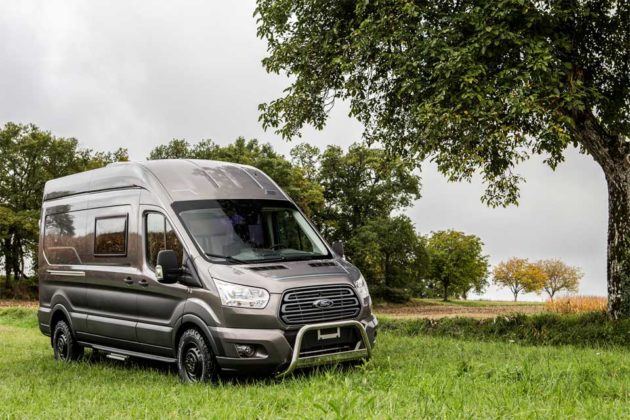 Other Ford standards you can expect from this multi-terrain camper includes Ford’s SYNC 3 voice-activated connectivity and entertainment system with a high-res 6-inch color touch display, Adaptive Cruise Control, Traffic Sign Recognition, Pre-Collision Asst with Pedestrian Detection, and Side Wind Stabilization. While we elated by a Transit-based camper we are, however, irate at the lack of information. You see, Trigano is a massive organization (like really, really big) that has many companies/brands under its wings. We tried digging into as many of the websites of the individual brands and yet we find nothing about the Randger 560.

So, yeah, little is known about this new rolling home from Trigano, except for the fact that it is a four-berth motorhome that has five seats and it will come outfitted with creature comforts like a bathroom with integrated shower. Beyond those, everything is a mystery to us. But you can probably find out more at the Salon des Véhicules de Loisirs, Le Bourget, France, where the Ford Randger 560 Motorhome by Trigano has made an appearance. The event runs between September 30 and October 8. So, if you are in and around the said area, you can drop by to sniff it out. Randger 560 is the second Transit-based camper from largest manufacturers of motorhomes in France after the first Transit-based Karmann Dexter 4×4 motorhome debuted in Germany earlier this year.