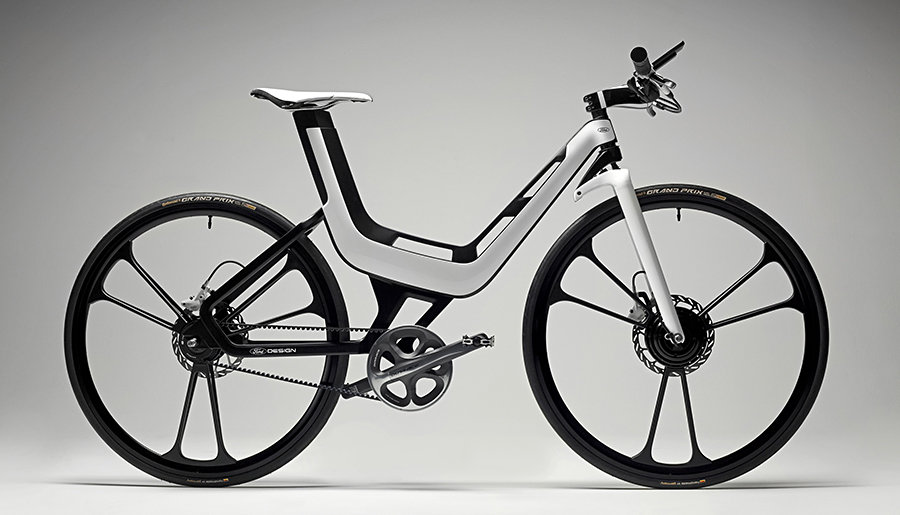 automaker dabbling into bicycles aren’t new and the latest to join this automaker bicycle bandwagon is Ford, and in the process, Ford took it to a whole new level by conceptualizing not only an electric bike, but one that incorporates technology used in the Formula One race car. making things more interesting is, instead of commissioning some bicycle specialist to create this bicycle, this yet-to-be named e-bike concept is developed by one Ford Design team in collaboration with cyber-Wear, the German brand that’s also responsible for Ford’s Lifestyle Collection products. one look at the E-Bike Concept, you will know this isn’t your regular bicycle or electric bike, for that matter.
[ad#Google Adsense-text-468×60]

on the simpler side of things, it has an aluminum and carbon fiber frame, internal gear from Shimano Alfine 11-speed, Shimano Rapidfire shifter, carbon belt for its chain, brake discs and a gorgeous unisex design that would appeal to both gender of cyclists. and that’s just part of story. beyond its sleek, futuristic look is a lithium-ion battery tucked away inside its frame that juice a 350-watts electric motor mounted at its front hub and along with this motor is the magnetostriction sensors – sensors that are used in Formula One cars. these sensors read how hard the cyclist is pedaling and relay this information to its control unit in split seconds.

the control unit in turn activates or deactivates the electric motor to provide a “seamless integration of the power of the legs with the power of the motor.” a handlebar-mounted display keeps the cyclist up to speed on the trip information akin to that of an automobile’s instrument cluster which includes range, battery capacity, speed et cetera. according to Ford PR tidbits, an iPhone app for this concept bike is in the pipeline which also signifies that this concept might actually make it into production but as to when, it is still anybody’s guess. a few more concept sketches of the Ford E-Bike awaits after the break.