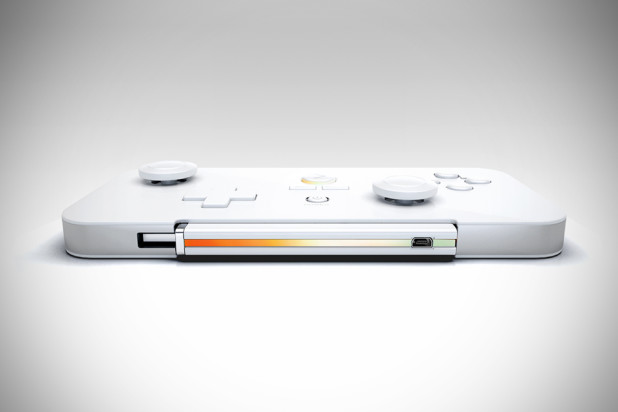 your eyes are not playing tricks on you and it is most certainly not typos either – the GameStick Portable TV Android Games Console by PlayJam is in fact a Android-based game console that cost just $79. the idea is brilliant: take a console game system and shrink to a 2-inch USB-like stick that you could just plug into just about any TV with an available HDMI port and start having fun via its bundled Bluetooth controller. thanks to the advancement in Android gaming platform, playing console-quality games on Android platform is a reality and cost much lesser than you would have paid for full-fledge console system’s games, and that’s not to mention the huge benefit of not having to mess around with cables. the GameStick plugs directly into your TV’s HDMI port and draw the power it needs from the port to power its Amlogic 8726-MX processor. on the specs end, it features 1GB of DDR3 RAM, 8GB NAND Flash for internal storage, WiFi b/g/n connectivity, Bluetooth LE 4.0 technology and it is, of course, accompanied by a beautiful full-featured Bluetooth controller with support for four additional controllers. man. the part where you can enjoy console games without the clutter really have me sold and the fact that you can actually bring along the console along to wherever you want is totally crazy (in a good way, of course). and in keeping true to its portability mantra, the GameStick pops right into it’s own controller, thus creating a neat, pocketable package that you can bring the console to any TV you fancy. this got to be the best thing we have come across all week. the GameStick is currently on Kickstarter seeking your support and all you have to do is to make a pledge of $79 or more, the GameStick will be yours once the funding goal is reached.