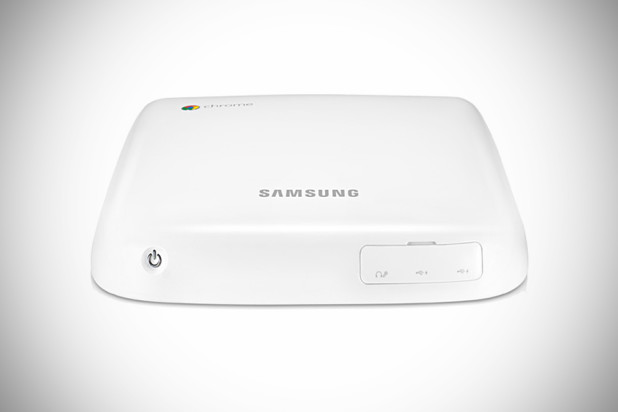 the next logical step to take after becoming the undisputed giant of consumer electronics is not to let your product look too much like the world’s most valuable company’s – which is what we see the Korean electronics juggernaut is doing with their latest iteration of the Chromebox, dubbed the Series 3 Chromebox (XE300M22-B01US). with a form factor somewhat similar to Apple’s Mac mini, even an amateur like us would also be careful not to straddle into the fruity company’s design domain and hence, we thought the new, slightly roundish, all white plastic design is a refreshing (and legally safe) facelift. driving the Cloud-based Chrome OS is a 1.9GHz Intel Celeron B840 processor with RAM fitted to the max at 4GB, which is nothing to shout about, really, but far capable as far the cloud is concerned. other features include 16GB SSD, integrated Intel HD graphics, built-in 2W mono speaker, WiFi (a/b/g/n), a pair of Display Port, DVI-out, headphone/microphone jack, Ethernet port and a healthy serving of six USB 2.0 ports (sadly, no USB 3.0 here). like it predecessor, the Series 3 Chromebox has two of its six USB ports located up front, along with the headphone/mic jack but these inputs now sports a cover over them – a feature that more likely for aesthetic’s sake (nevertheless, a welcomed touch). along with the hardware is the usual benefit of Chrome OS such as boot up in seconds, instant resume, fast web browsing, app launcher, safe back up to the cloud and free, automatic updates. apparently, this computer went on sale in UK recently for £279 (or about US$453.50). though there’s no indication if the Stateside, or the world for that matter, would be receiving the new Chromebox.

Samsung via Liliputing via Engadget