DualShock 4 is no doubt a leap forward in game controller design and functionality for Playstation. this little wonder packs a light bar, a capacitive touch pad, built-in speaker, and of course, the obligatory haptic feedback serves up via vibration, but its resident 1,000 mAh rechargeable battery can hardly deal with demanding (read: marathon) gamers’ thirst for gaming. as far as hard core gamers are concerned, 12 hours ain’t going to cut it. though a charging cable comes bundled with the console which allows gamers to juice up the controller and using it simultaneously, not everyone fancy being tethered. for those who doesn’t want to be tied down by a charging cord (or at least, not as often) and still hope for extended play time, gaming accessories maker Nyko has the perfect solution for you: the Nyko PowerPak For PS4.

costing just $15.25, the Nyko PowerPak packs an additional 1,000 mAh which, should in theory, doubles the battery life of your DualShock 4 controller. as you can see from the product image, the power pack is designed to stuck to the back of the controller in a seamless manner, connecting through the controller’s microUSB port while providing its own microUSB port for charging both the batteries at the same time. we don’t how true it is, but according to some users, the PowerPak might be a culprit in hindering the use of L2 and R2 shoulder buttons. as such, it might be a good idea to hit a brick-and-mortar stores and give it a test fit to if works well with you. 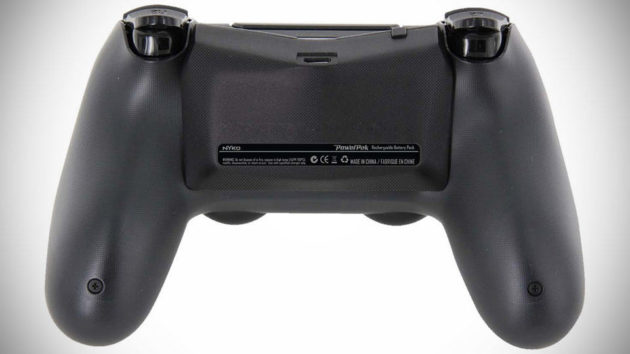