global GPS device company Garmin has been pretty busy lately, turning out a number of wearable GPS devices that will have activities like running, hiking, and golfing covered, and now it also has special force agents and wannabes covered with the new Garmin Tactix GPS Navigator Watch. “inspired by the requirements of Law Enforcement and Police Special Operations”, this field-ready wrist watch packs an altimeter, barometer, 3-axis compass, plus the usual GPS features that would prove to be invaluable in getting around the field. Garmin did not specifically said it is ruggedized, but is described as being ‘rugged’ which should be good enough to be put through the paces both in the field and in everyday life.

clad in a stealth, matte black design for presumably, tactical sake, it is waterproof to 50 meters, and sports curved mineral glass lens, night vision-friendly green LED backlight, and last up to 50 hours in GPS mode on one full charge – but it would last up to five weeks in watch mode. so, yes, it also doubles as a more monotonous time telling device with functions such as alarms, tones, vibration alerts, timer, stopwatch and world clock, if GPS functionality is not required. U.S. units will come preloaded with tide data for tide watchers, fishing enthusiasts, surfers or maybe for covert beaching operations, while the rest of the world will get the Jumpmaster software and worldwide basemap that displays nearby cities.

also built-in are ANT+ capabilities, as well as Bluetooth connectivity to wirelessly share tracks, waypoints, routes and more with other compatible Garmin devices or smartphones, and it can also doubles as a remote for the VIRB action camera too. last but not least, like all previous Garmin wrist-worn devices, it is also an activity tracker that keep tracks of real-time performance data such as distance traveled, pace, cadence, and calories. the Garmin Tactix GPS Navigator Watch will be available this Fall for $449.99. another look after the break (click for larger view). 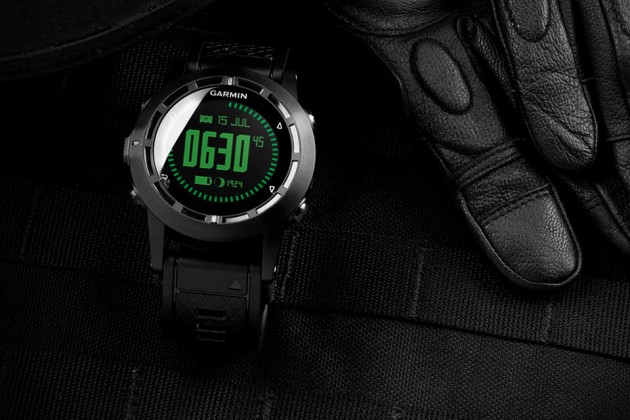