being a tech-lover, you are probably as excited about the Firefox OS as any new gadgets that pops up in the market, but there is just one problem there: risk. it is, after all, a new OS and there’s no telling of the behavior. with the Geeksphone Revolution Dual Boot Phone, as the product name implies, you get to experience two OSes. problem solved. available now for €220, or about three hundred and two American dollars, the Revolution is fitted with a 4.7-inch qHD IPS multitouch display and powered by a 1.6GHz dual-core Intel Atom Z2560 chip. it has 1GB of system RAM and 4GB internal storage which, as always, is expandable with microSD card (up to 32GB can be supported).

other details include a 8.0-megapixel, LED flash-equipped main camera, a 1.3MP front-facing item, Full HD videoing, 3G radios, HSDPA support (and GPRS and EDGE, if you really wants to know), WiFi (supports up to wireless n), Bluetooth 3.0 technology, GPS and A-GPS, plus the usual host of sensors including G-sensor, electronic compass, light and proximity sensor. and oh, it has a 2,000 mAh, but no data was given on the battery performance. our thought is, the Geeksphone Revolution is more likely a geek’s phone (pun not intended) than a ‘regular consumer’ handset. well, at least now you know it is ready for your taking. a look at the back of the handset after the break. 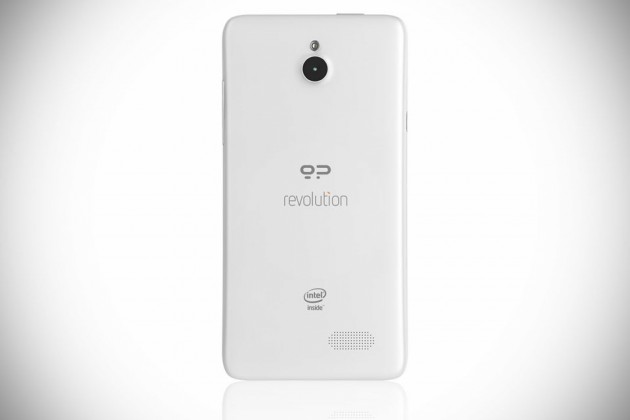