most of us have learn to cope with short smartphone battery and by ‘cope’ we mean having at least one portable battery charger. however, we see another problem with portable batteries: forgetting to charge them. admit it. this has probably struck you at least once. heading out, phone goes low batt, whip out portable battery to find that it is also flat out. the NomadPlus, like a few accessories we have seen, aims to solve that, or at least take the clutter out from the need to charge yet another thing. NomadPlus is a super sleek solution that integrates with standard Apple USB plug for iPhones, thus allowing it to charge both the iPhone and NomadPlus’ internal battery through just one outlet.

it has a 1,500 mAh lithium-polymer battery built-in, enough to serve up an additional 70% of battery charge for iPhone 5s, and features a clever pass-through charging circuit that will charge your phone first before charging the internal battery. so the next time when you grab NomadPlus on your way out, you can be sure it will have the juice when you need it. NomadPlus Portable Battery is open for pre-order now for $39 a pop. oh, there’s a caveat, though. it is designed for U.S. version of Apple standard USB plug (two prong, IEC Type A for the geeks). those in the UK or EU can put down their names on Nomad’s mailing list to be informed of other plug style availability. 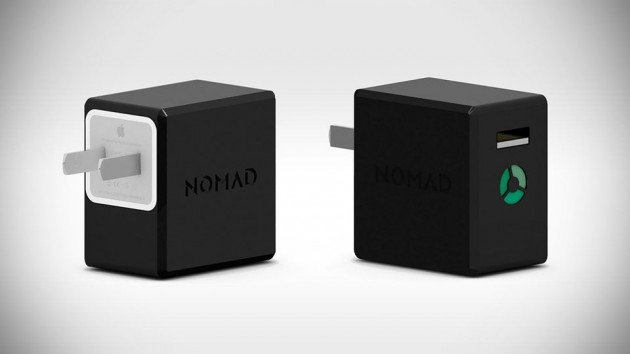