Like the Internet, drone is the best and worst thing to happen in modern history. We have fun with it. We took awesome images with it and we also use it to inspect out-of-reach places, et cetera, but on the flip side, this brilliant invention of modern history has some more sinister applications too – to which, the U.S. government knows best. And it just the government that sees the deathly potential of drones. Some amateurs, like a couple of Finnish farmers and the controversial Austin Haughwout, also managed to explore the dark side of drone technology. 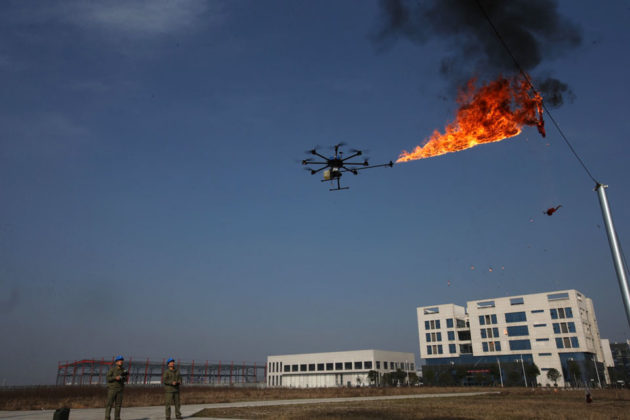 Speaking of Austin Haughwout, this young lad may have shown us the darker side of a drone by outfitting it with a flamethrower (of sort), but a fire-spewing drone, as it turns out, was not as bad as it sounds, well, at least not to an electric company in Xianyang, China. Apparently, all manners of trash are found to be caught on the power lines (seriously, don’t ask me how) and instead of sending someone on a cherrypicker, or even a helicopter, to clear the trash/debris one plastic bag at a time, the maintenance workers from the electric company uses a drone that shoots fire to burn off debris that, for some reasons, managed to get stuck on those high-voltage wires.

It is not a pretty sight, but we must say it is quite an ingenious way of getting rid of unwanted stuff clinging on the power lines. Seriously, how the hell did those trash managed to find their way up there??? Like, you know, so many feet above the ground? Anyways, it looks like it is a problem solved, in an easier and more efficient way, for this China electric company. 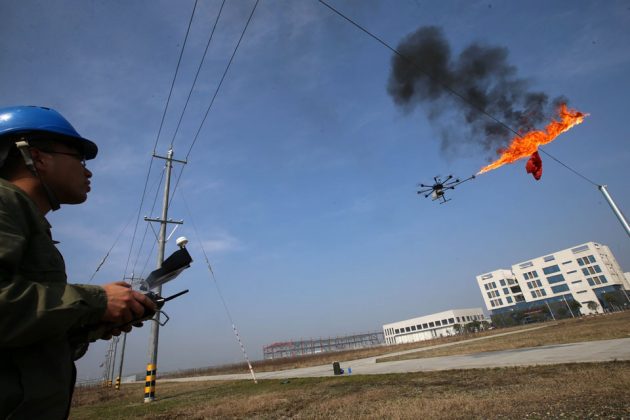 Images and source via Gizmodo.