A drone with chainsaw may not sounds as terrifying as one that spews fire or shoots, it is however no less dangerous. I mean, it don’t take a genius to know that flying drone with running chainsaw is bad news. It’s not the Predator, but it is totally capable of doing significant damage to people and property if not handled right. Speaking of drone with chainsaw… that’s what exactly Finnish farmers did. They outfitted a DJI S1000 imaging drone with a remote controlled chainsaw and surprisingly, not only can the drone lift the power tool with ease, but it can fly around doing some pretty awesome damage that are otherwise out of reach for a chainsaw-wielding man. 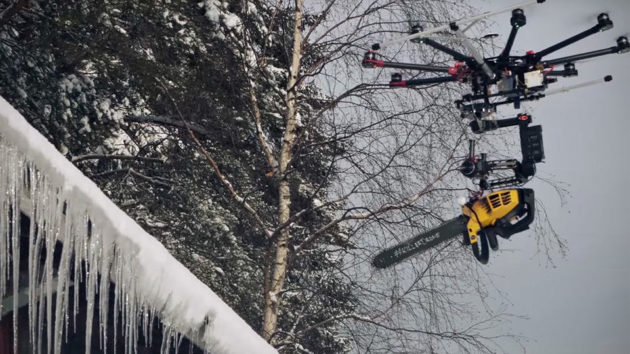 The farmers took the KillerDrone, as it is called, through the paces, sawing down icicles and tree branches, and even smashing through a snowman. The entire proceeding was captured on camera by video maker NoodleTail, which you can view in the embedded video below. Potential terror aside, the creation is actually quite brilliant as it allows trimming and cutting stuff that are normally out of reach, or only within reach with the use of ladders or mobile lifting platforms. So, it could have some practical applications after all. Though we are pretty sure Leatherface has other agenda swirling around his twisted mind when it comes a flying chainsaw. Yikes.