own a piece of the history of space exploration and photography by getting your hands on the Hasselblad 500 ‘EL DATA CAMERA’ NASA. from the official title, the camera doesn’t seem like much, except perhaps for the acronym ‘NASA’ which may spark some curiosity. however, this is a significant camera in the history of mankind. not only it is a vintage from the golden era of Hasselblad, but it is the only camera that went to the moon and back. yes. you heard that right. this particular example, which is destined to go under the hammer at the WestLicht Photographica Auction on March 22, was part of the Apollo manned missions and was specially designed to be fitted to the front of an astronaut’s suit.

altogether, there were 14 cameras sent to the moon between 1969 and 1972, but this was the only that was brought back to earth for some unknown reason, while the rest were presumably left on the moon. the cameras, each weighing up to a few kilograms, were sacrificed in order for the astronauts to bring the moon rock back. not surprisingly, cos’ space and weight were premium back then and so the story goes that NASA had to forego the equipment in order to bring the prime objective back. which brings us to this question: was NASA littering on the moon? well, they probably did, which means you can probably find remnants of the Hasselblad or whatever other stuff they had brought there, laying around the barren surface. well, not that average folks like us will be visiting the moon anytime soon, still… littering is littering.

anyway, you can save yourself a trip to the moon by heading to the WestLicht Photographica Auction to grab this historical piece of gadget, but be prepared to sign off a big, fat check cos’ according to Peter Coeln, owner of the WestLicht Gallery, the Hasselblad 500 ‘EL DATA CAMERA’ NASA aka the Moon Camera is expected to fetch between 150,000 and 200,000 euros (or about US$200,000-US$270,000). 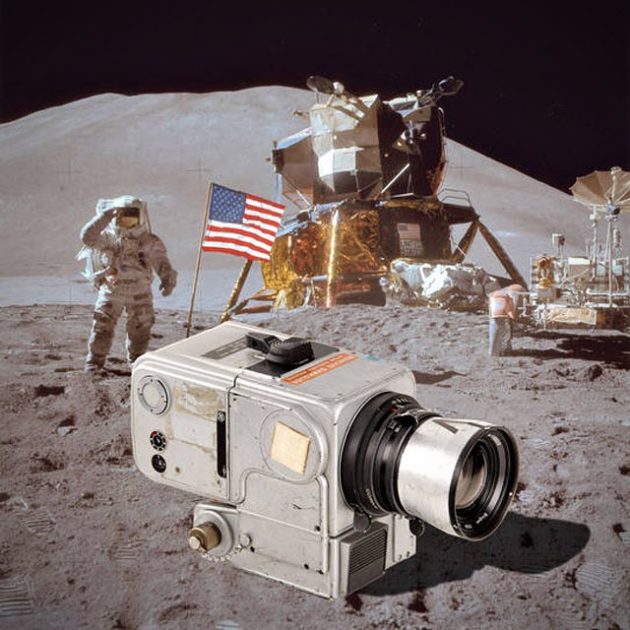