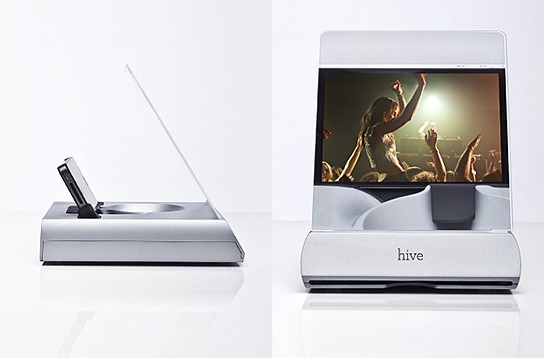 we have seen a handful of ‘natural amplification‘ dock for iPhone but one that boost up your display size is probably the first. dubbed the ‘Hive’, this nifty gadget for iPhone 4 not only amplifies the sound of your iPhone 4 when docked but it also doubles the size of your iPhone display, thanks to a specially made rectangular magnifying glass. check out the video after break for a short intro of the Hive.
[ad#Google Adsense-text-468×60]

as with many others, i have am not so sure about the ‘quality’ of the sound and video. we can forgive the limitation of ‘natural amplification’ but the video looks rather distorted when view through the magnifying glass. which kind of spoil the wholesome goodness of the retina display. the magnification could benefit those who has trouble reading tiny fonts but other than that i take the idea with a pinch of salt.

if you have money to spare, you can back this project over at Kickstarter. for a pledge of $45 and above, you will secure your Hive dock. however, as with all Kickstarter project, the project has to hit its pledge goal, in this case a whopping $150,000, in order for the project to get kick started.