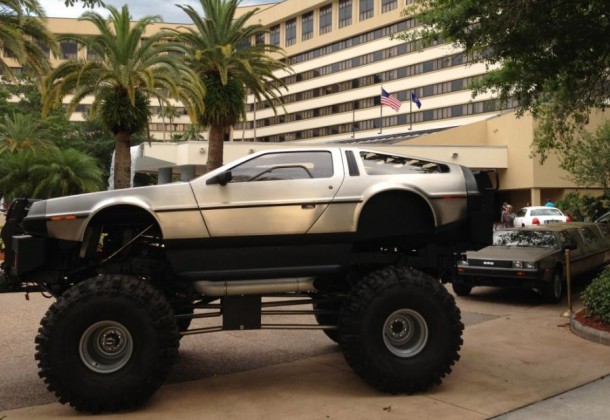 yes. we couldn’t believe our eyes either. this is definitely not the DeLorean that we remembered. still fresh in our mind is the DeLorean that can take to the sky and zip through time (and leaving trails of fire in process, even in the sky!). this awesome ride began its second life back in 2002 (yes, it is 10 years old now) when it was refurbished by one DeLorean enthusiast by the name of Rich W. thereafter its recreation, it was named the D REX. it may not sport a flux capacitor to allow it to time travel nor can it take flight but it can certainly trample over any regular automobiles with ease. showcased at the 2012 DeLorean Car Show & Convention (June 12th – 15th) held at Orlando, Florida, the beautiful stainless steel body of this 1981 DeLorean sits mounted on a 1979 Chevrolet K5 Blazer chassis and is powered by a 5.7-liter V8 small-block mated to a Chevy 350 Turbo transmission. well, this vehicle is certainly not something Doc have envisioned but then again, Hoverboard is still not a reality today, isn’t it? much less a flying car that can travel through time. hit the jump for a short clip of the DeLorean beast backing out or head on down to Rich W’s page for some brief history of the D REX and while you are there, you can check out Rich’s other works. all DeLorean stuff, of course.

NOW READ  ATLIS XT Electric Pickup Truck: A New Way Of Buying An EV Or Any Vehicle For That Matter