the NSX is like a promised made to a child that never kept. through the years, we have been teased and witnessed the prototype hit the tracks, but never a piece of news that indicates it is anything but mythical – until now. however, if 2015 still sounds too far into the future for you, then the new NSX will still be a myth to you anyhow. described as a ground-breaking supercar, the NSX is propelled forth by an innovative three-motor Sport Hybrid Super Handling All-Wheel Drive (SH-AWD) system and is set to enter production in 2015 (finally!). and to prove that they are committed, Honda will be bringing the Honda NSX Prototype Hybrid All-Wheel Drive Supercar to this year’s Goodwood Festival of Speed, happening between June 27 and 29.

if you ask me, i’d say Honda is serious this time, cos’ over two decades ago, the automaker has made used of this same festival to showcase a fleet of 10 NSX and doing so this year is a clear signal that the new generation and long overdue NSX is ready to take on the world. visually, the look is unmistakably NSX, which no doubt is set to win hearts, but it is what lies under the skin that could be more endearing (and worthy as a technological marvel): a longitudinally mid-mounted, direct-injected next-generation twin-turbo V6 engine, paired to Honda’s Sport Hybrid SH-AWD system. the latter is a hybrid system that combines torque vectoring all-wheel drive with advanced hybrid efficiency by employing three electric motors. one motor is integrated to the V6 engine like most hybrids and sends the power to the rear wheels via an all-new dual-clutch gearbox, while two motors drives the front wheels.

Honda said that this system allows for “instant delivery of negative or positive torque to the front wheels during cornering to achieve a new level of driving performance not experienced by current horde of AWD systems.” the Honda NSX Prototype will be joined on the famous hillclimb by a 1989 3.0-liter NSX, once driven by the legendary Aryton Senna, and a 2005 3.2-liter model. the intention is clear: they meant business. 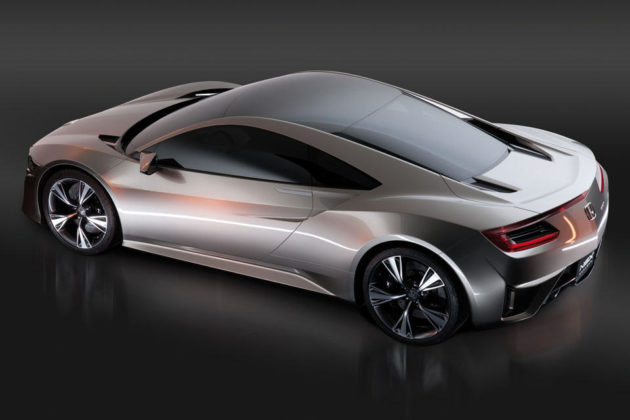