Apart from the threat from other road users, motorcycle riders have another big concern: keeping the bike from falling over when coming to a rest or in slow traffic. That has been a problem that riders of past and present learned to deal with, but thankfully, it won’t be pass on to the future (or perhaps even near future) – thanks to Honda’s innovative Riding Assist. As of now, technology by the way of gyroscope is one option to keep a two-wheeler, or even single-wheel, vehicle upright without the rider performing circus act, but that, to Honda, is just way too cumbersome and could potentially alter the ride experience. So, instead, the Riding Assist leverages on the company’s robotics technology originally for Honda UNI-CUB self-balancing personal mobility device.

As you can see in animated GIF (and later, in the video below), the concept motorcycle equipped with this innovative self-balancing technology stays upright with or without the rider and if we interpreted correctly, it even as a follow mode which it moves at a snail pace without tipping over. If incorporated into future production motorcycles, which Honda expressed it shouldn’t be an unsurmountable task, the incident of motorcycle falling over when coming to a rest will be a thing of a past and it will also make riding in slow moving traffic easier as it liberates the rider from the need to constantly keep the bike balanced through the rider’s physical action. 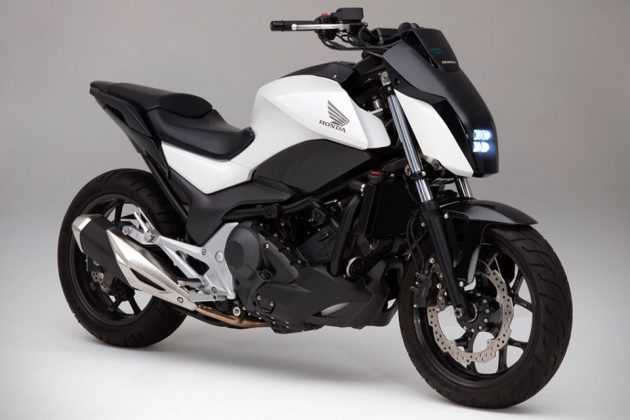 So what kind of sorcery enables this magic to happen? Well, according to PC World, the secret sauce lies in its front wheel which keeps “moving back and forth, sometimes almost imperceptibly, to keep the bike balanced.” Though the actual inner working is unknown.

Looking at the prototype unveiled at the freshly wrapped CES, one may think that Honda Riding Assist is ready to be implemented since it looks pretty much like a regular production bike. Well, about that, it is partly true. It is regular production bike only from the handlebars back, but the front is not quite; the front is where the bulk of the self-balancing technology is and so, no, there’s no timeline on when it be included on production bikes. But as we always say, it’s Honda and so, it will see fruition somehow. The question is never if, but when.