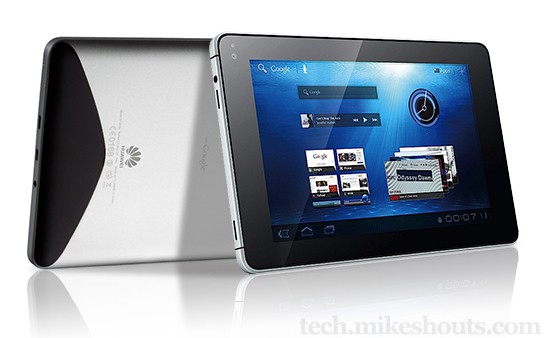 meet Huawei’s latest candidate for the on-going tablet war – the MediaPad. announced last month, the MediaPad is a 7-inch tablet powered by the latest Android 3.2 (aka Honeycomb) Operating System. encased within its beautiful aluminum unibody is the Qualcomm’s dual core 1.2-GHz processor and display duty is undertaken by a 7-inch IPS capacitive multi-touchscreen. the imaging department is handled by a pair of cameras: a 5.0-megapixels autofocus rear-facing camera, and a 1.3-megapixels front-facing camera.
[ad#Google Adsense-text-468×60]

interface and connectivity comes in the form of micro SD card slot (along with 8-GB of internal storage), HDMI-out, HSPS+ and WiFi 801.11 b/g/n. other features include light and gravity sensors, 1080p full HD playback and video recording, and the support for Flash 10.3. the MediaPad has a built-in 4100-mAh Lithium-polymer that’s good for six hours of usage. the MediaPad will exist as a 3G/WiFi model and there are no plans for WiFi-only model at this point. personally, i don’t see as a shortfall, except that it will be likely tied to some telco. no hint on the pricing yet but it is slated to land sometime this Fall. check out a short product intro video after the break.