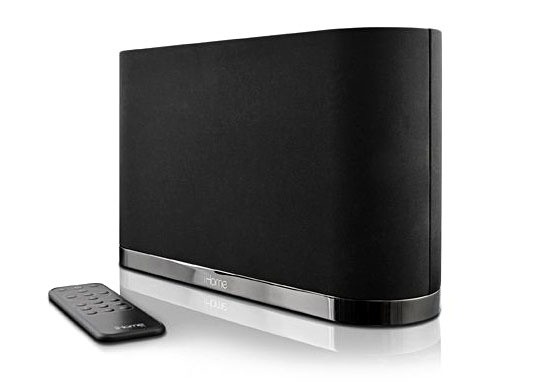 iHome joins the rank of AirPlay-enabled audio system with its iW1. ensuring a wire-free experience, it is packed with a rechargeable battery and utilizes Apple’s AirPlay technology to stream music wirelessly over WIFI (b/g only) from iTunes or your iOS devices. aesthetically, the system has a minimalist but yet, contemporary look that should blend in with any modern decor. strangely, despite its imminent launch, there aren’t much info to go around for now. we do however noted a few features, including Bongiovi Acoustics digital signal processing, adjustable bass and treble, backlit buttons, and music playback via both AirPlay streaming or USB docking.
[ad#Google Adsense-text-468×60]

the system comes with a dedicated remote control but user can also choose to control the audio system directly with the touch panel on the system itself or from your iOS devices via a free iOS app (iHome Set). this free app also doubles as a interface for updating firmware of the audio system, while another free app (iHome connect) is used to setup your iHome AirPlay speakers. the iHome iW1 AirPlay wireless audio system is set to be available from September 26 for around $300. check out a short product intro video after the break.