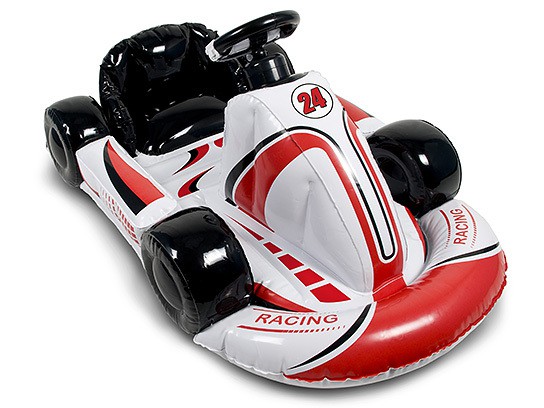 racing game fans will appreciate the realism that a racing simulator set-up can provide but often, these expensive set-up are reserves for consoles like xbox 360 and PS3. Wii fans are often left in the cold, until now. CTA, a firm specialized in gaming accessories, introduces the Inflatable Racing Karts for Wii – a inflatable kart designed in the style of a go-cart complete with a plastic steering wheel that holds your Wii-mote with or without MotionPlus. perfect for a game of Mario Go-Kart race.
[ad#Google Adsense-text-468×60]

it maybe an inflatable but it is capable of supporting up to 300 lbs (about 136 KG) of weight. the best part is, it can be easily be deflated for storage, thus giving you the space you need for your next party at home. instead of pricey thousand bucks simulator, the Inflatable Racing Karts for Wii only cost $39.99 a pop and is available on Target online store. granted, it’s not a real driving simulator per say but hey, it’s better than nothing and it is affordable too.

(image credit: CTA) don’t underestimate this inflatable. it can actually hold up to 300 lbs