one look and you probably already knew why the product is so named. our first thought was, the Ink Whiskey Concealable Entertainment Flask is going to be the perfect gear for those who 1) felt the need hide their drinking habit from everyone else; 2) need an adult beverage flask that would stand out from his/her peers; and 3) is addicted to video game, in addition to alcoholic beverages. this drink flask disguised as a classic Nintendo game cartridge was a successfully funded Kickstarter campaign which ended on the 23rd this month and so, for those who have missed it, you will just have to wait for it to hit the stores sometime next year – hopefully for the same affordable 20 bucks as it was offered on Kickstarter.

and being a drinkware, it is crafted from BPA-free ABS polymer that makes it safe to drink from and each flask comes complete with a matching cap at the grip portion of the ‘cartridge’. wrapping up the whole throwback look is the alcohol-themed parody art labels – in 8-bit style no less, referencing to memorable Nintendo classic games such as Drunk Hunt (Duck Hunt), Super Bar Hop Bros. (Super Mario Bros.), and The Legend of Drink (The Legend of Zelda). each label’s artwork includes “You can put your BOOZE in it” or “BOOZE is okay too” graphic as a subtle reminder that this is for your favorite fiery drink and not for your Nintendo machine.

an awesome idea, no doubt, but judging from the sprout position, you probably can’t drink straight off it like a real alcohol addict would, which could be bummer for some serious on-the-go drinkers. whatever it is, if you falls into any of the aforementioned three categories of alcohol drinker, do look out for the Ink Whiskey Concealable Entertainment Flask when in hit the stores next year. in the mean time, you can learn more about this novel flask in the embedded video below. 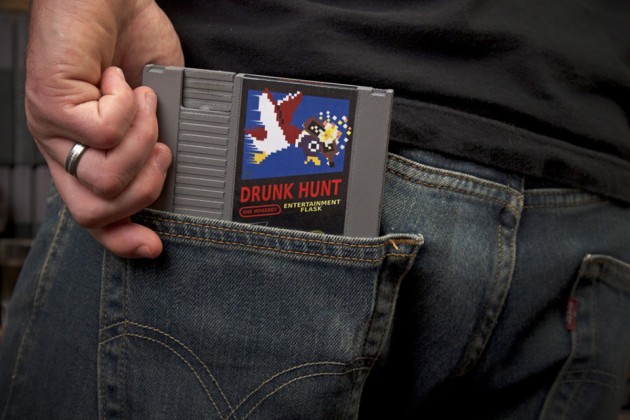