yesterday at London’s Earls Court, Jaguar pulled the wrap off its rear-wheel drive performance-orientated Jaguar XE S, powered by a range-topping supercharged 3.0-liter V6 that offers 335 horses (340 PS) and 332 lb-ft (450 Nm) of torque. clad in an aluminum-intensive monocoque with an uber streamlined styling, the XE S is touted as the most aerodynamic Jaguar ever made with a low drag coefficient of just Cd 0.26 and is fitted with an eight-speed automatic gearbox with paddle shifters that allows this handsome steed to launch from standstill to 60 mph in mere 4.9 seconds and sending it on its way to an electronically limited top speed of 155 mph. Jaguar said it is also the lightest and stiffest Jaguar sedan yet and most importantly, it offers a low cost of ownership with highly competitive fuel economy, emissions, insurance ratings, service intervals and residual values – all for an indicative price range starting at 27,000 quid for the XE range. 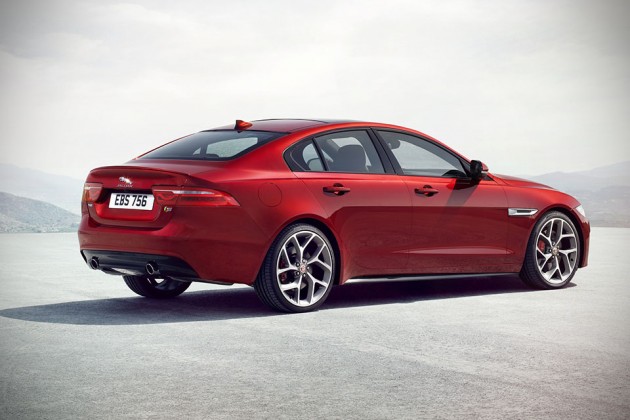 the Jaguar XE is also the first Jaguar to be equipped with electric power steering, specially tuned to provide exceptional responsiveness and feel, but with a lower energy consumption than traditional hydraulic-driven systems. a few other details announced before its official appearance at the Paris Motor Show starting on October 2, 2014 includes an intuitive new InControl infortainment system and Intelligent Active Safety technologies built into it. pretty exciting stuff if you are into performance ride with practicality in mind. practicality in terms of running cost and passenger capacity. we will have more info in time to come. in the meantime, there is a handful of images here to tie you over, courtesy of Jaguar Land Rover. enjoy.