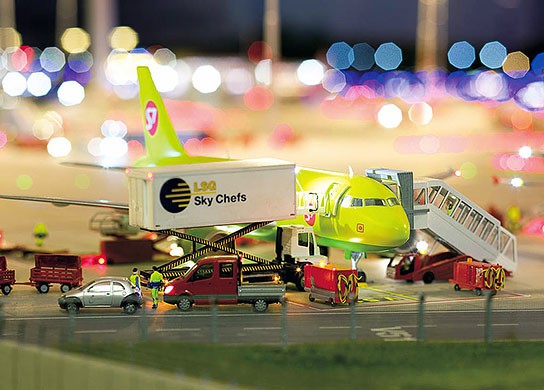 as kid i was fascinated by the workings of an airport and the problem was, i never get to see the ‘overall picture’ of the airport at work. it will be ultra cool if i can get to see all the bustling activities of an airport’s workings. it looks like my wish has just came true. Hamburg’s famed ‘Miniatur Wunderland‘, the world’s largest model railway exhibit has just officially opened the ‘Knuffingen Airport’, a computer-controlled miniature airport complete with moving vehicles, working lights, and aircraft that take off and land continuously.
[ad#Google Adsense-text-468×60]

this 150 square meters miniature airport took seven years, 150,000 working hours and a whopping 3.5 million euro to complete. the result? an ultra-realistic working airport that includes taxiing of aircraft, a fleet of 40 aircrafts, cargo vehicles and trains. adding to the realism are lit runway, control tower and airport terminals. it even replicates the traffic outside of the airport terminals. simply stunning. the miniature airport setup uses a pair of metal rods and cable drag chain to facilitate the movement, taking off and landing of the aircrafts while the rest of the land vehicles’ movement is via a system of magnets.

with the addition of the airport, the Miniatur Wunderland now has a total of eight sections that include the landscapes of Harz, Austria, the fantasy City of Knuffingen, Hamburg and the coast, America, Scandinavia, Switzerland and of course, the newest addition – the Knuffingen Airport. visitors will be treated to a host of familiar landmarks including America’s Las Vegas, the Grand Canyon and Hamburg’s St. Michaels Church. there’s even night scenery too. every day in the miniature world is just 15 minutes, therefore ensuring visitors will be able to experience the miniature world’s glorious night scenes.

as it stands, the Miniatur Wunderland has 890 miniature trains traversing through 12,000 meters of train tracks, 5,500 vehicles, 200,000 human figures and a mind-boggling 300,000 plus lights. founded in year 2000 by twin brothers Frederick and Gerrit Braun, the Miniatur Wunderland’s model area currently occupies 1,150 square meters and is expected to double its current display space to over 2,300 square meters by year 2020. for detailed facts and figures, check out the Wunderland facts on their website.