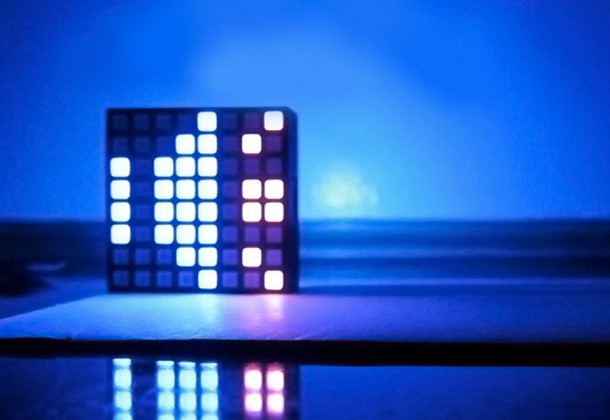 as of now, any connected person in this world are pretty much overwhelmed by notifications. you get notified for new email, Facebook friend request, chat alert, a new mentioned for a tweet and so on and so forth. regardless of which tone you use for the notifications, things can get pretty noisy with the ever frequent buzzing which can be rather annoying sometimes. if the folks behind the ingenious L8 SmartLight have their way, your hope for some quietness may just come true without you ever missing a single alert. the idea? notification without sound. get it? the little box is packed with 64 RGB LEDs on one side and a single super RGB LED on the other, and it will work in sync with your smartphone, tablet, computer and connects to your social networks, alerting you with bright, fun lights whenever there is a notification. lies within its unibody enclosure is a Bluetooth module that allows it to connect to virtually any Bluetooth-enabled device and sensors for temperature, luminosity, as well as proximity. the device is totally programmable so users can set which ‘image’ to display for each specific notification. for example, you can display a LED GMAIL-like logo whenever you receive a new mail or a pulsating LED heart when your dearest calls. you can even set it to alert you of the rising room temperature – if you are too engross in whatever that you are doing and fails to feel the heat. apart from the basic duty of notifying without sound, it also doubles as a cool ambient lighting. the L8 SmartLight is a Kickstarter project, so making a pledge of at least $69 will snag you one – if the project gets funded successfully. check out a short product intro right after the break.