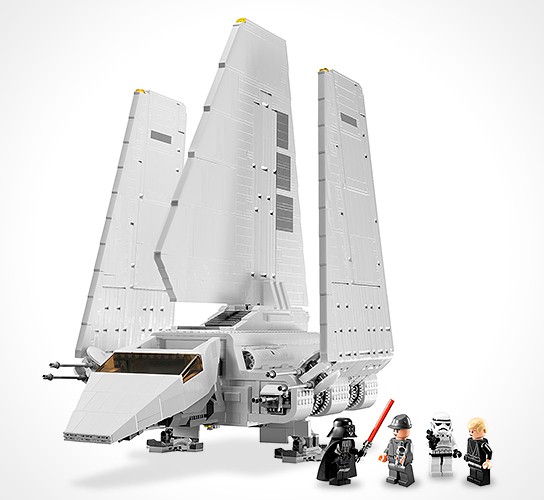 this is going to make any LEGO-Star Wars fan weep with joy and to think that i am only aware of this now, is totally unforgivable. the LEGO in question is the #10212 LEGO Star Wars Imperial Shuttle that is based on the Lambda-class T-4a Shuttle transports. the kit comes has 2,503 pieces of building fun which is definitely miles better than my two puny imperial shuttle release years ago. it looks like LEGO has dropped the Ultimate Collector Series (UCS) namesake but this particular kit looks to be in the league of the UCS.

authentically detailed, this Imperial Shuttle is a true minifigure scaled vehicle and comes packed with five minifigures that include the evil sith Darth Vader, Shuttle Pilot, Imperial Officer, Storm Trooper and Luke Skywalker. naturally, being such an exquisite model, it also comes with a display stand, nameplate and label sheet. the model measures 28-inches (71-cm) tall on stand and 22-inches (57-cm) wide with winds fully deployed. i am totally sold. LEGO itself doesn’t come cheap, so naturally, an exclusive kit like this will set you back at $259.99. more images after the break.
[ad#Google Adsense-text-468×60]