with varying needs of consumers in mind, getting a mostly positive tablet out in a single size isn’t quite a smart move, or at least that’s what the other South Korean major electronics maker LG Electronics thought so and hence, it has announced three new tablets (Android-powered, naturally) to its G Pad series “to offer more options for tablet users.” the newly announced G Pad devices, namely G Pad 7.0, G Pad 8.0 and G Pad 10.1, will be officially unveiled at the MedPI 2014 in Monaco, happening between May 13 and 16, 2014. we know what you are thinking: ‘don’t they already have a G Pad 8.3 and so why another 8-inch class? well, to be honest, we are equally stumped as you are and we are probably not going know the answer. all we know is that consumers now have a few more options, which is never a bad thing in anyone’s book, well, except maybe for Apple and Samsung.

anyway, the whole idea is to have the ground covered and in the process getting undecided buyers who have size consideration to take the plunge with the G Pad for their tablet needs. little is known about the innards, but LG has lay out some key features of each of the new G Pad in their official PR text. the G Pad 7.0 is designed specifically to be held in one hand and is an on-the-go entertainment hub that embodies portability and ‘power’. the G Pad 8.0 is a midsize offering is a tad smaller than the current 8.3 model, if ever so slightly and will offer “san immersive multimedia experience and smooth multitasking.” last but not the least, is the 10.1-inch model with the large display and battery that promised to deliver long hours of entertainment and fun. the new G Pad will also features LG’s UX features such as latest version of QPair and Knock Code. well, this is as much information we have now. we will probably learn more in a day or two when it debut at the MedPI in Monaco. 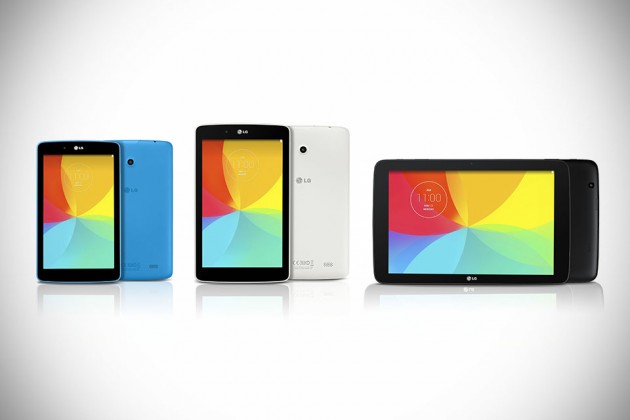