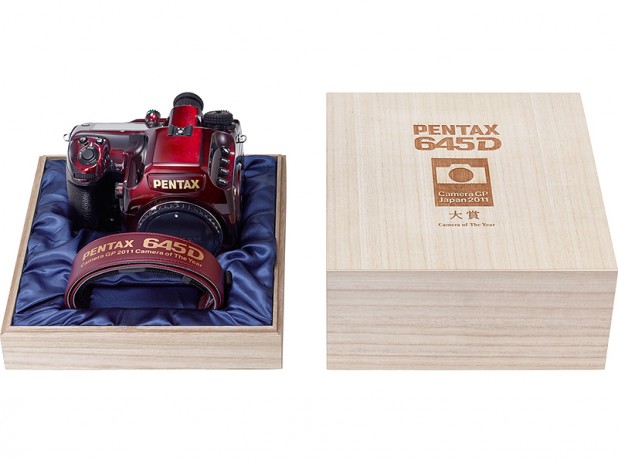 in celebration of the Pentax 645D being crowned “Camera of the Year” at the Camera Grand Prix Japan 2011, Pentax Imaging has announced a limited edition 645D. if you like everything ‘limited edition’ and has no qualms about waiting four months for it, this is the camera you should get. what you see above is exactly what it will look like: a lacquer-finished body that comes with a matching leather strap, body mount cap, as well as center-spot-matte focusing screen – all packed inside an awesome looking, specially designed paulownia-wood packaging. exist as a built-to-order model with at least a four months wait from the date of each order, this 40-megapixels digital camera juggernaut is a href=”http://en.akihabaranews.com/101469/cameras/pentax-announces-exclusive-limited-edition-of-its-645d-medium-format” target=”_blank”>said to be priced at ¥1.2 million(about US$15,170). according to its official press release, it will be available for pre-order via Pentax web store but at the last check, this luxe-up 645D is yet to be listed. hit the jump for a few more look at this luxe-up camera and the official press release.
[ad#Google Adsense-text-468×60] [toggle title_open=”Hide Press Release” title_closed=”Show Press Release” hide=”yes” border=”yes” style=”default”]PENTAX ANNOUNCES LIMITED EDITION 645D

PENTAX is planning built-to-order production of this model with a minimum four month delivery period from the date each order is placed.

First announced in June 2010, the PENTAX 645D is a high-performance medium-format digital SLR camera combining super-high-resolution digital images with approximately 40 effective megapixels that offers exceptional reliability and superb operability. The camera was selected Camera GP Japan 2011 “Camera of the Year” for its array of original, outstanding features including a large CCD sensor, and a dependable, dust-proof, weather-resistant body that operates in temperatures as low as –10°C.

Information about the camera, features, awards and product images is available here: www.pentaximaging.com/news

The new model kit will be available for pre-order on www.pentaxwebstore.com

PENTAX Imaging Company is an innovative leader in the production of a variety of adventure ready digital cameras including weather-resistant digital SLRs and stylish, compact, waterproof cameras, as well as lenses, flash units, binoculars, scopes, and eyepieces. For more than 90 years, PENTAX has developed durable, reliable products that meet the needs of adventurous consumers and businesses. With headquarters in Golden, Colorado, PENTAX Imaging Company is a division of PENTAX of America, Inc.[/toggle]