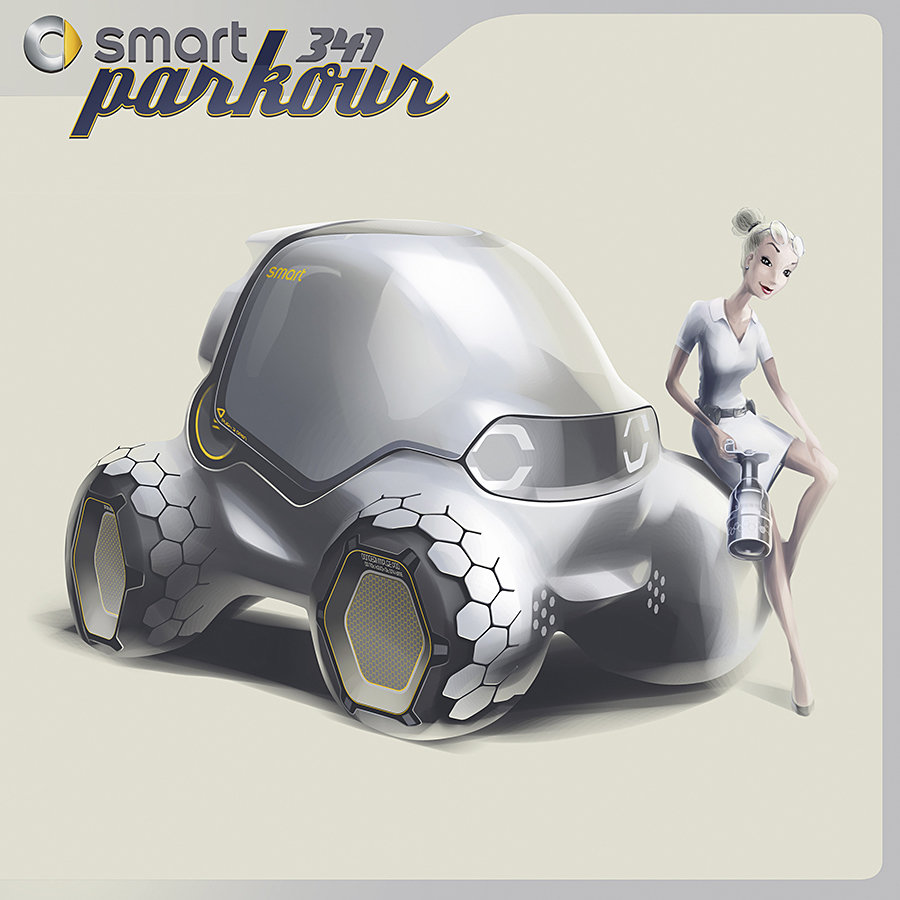 we love concepts because in concepts, there are no boundaries to tie ourselves to and hence, we can dream the wildest dream. it is all but limited to our imagination. this year’s Los Angeles Design Challenge 2011 presents a new challenge to automotive design studios around the world to dig their wildest fantasy for the “Hollywood’s Hottest New Movie Car” and Mercedes-Benz has some really wild concepts that could put a smile on any sci-fi fans. the first of the three is the Mercedes-Benz Silver Arrow that appeared in the a movie called ‘Silver Lightning”. set in the near future, where two crash test dummies takes on an evil ruler, the aptly evil Dr. Crash-Barrier to save their beloved Mercedes Silver Arrow.
[ad#Google Adsense-text-468×60]

in another movie, “Annie get the Grannies”, the Smart 341 Parkour is a journalist best friend taking her on a journalist adventure scaling the facades of skyscrapers and even taking it to the air, just what a professional Parkour sportsman would do. the cell of the 341 is “completely transparent and offers the very best all-round visibility – the perfect vehicle for a face-paced reporter story.” and then there is the Maybach Berline, the perfect machine for a modern day Cinderella story. unlike the 17th century Cinderella’s carriage, this Berline does not turn into a pumpkin at the stroke of the midnight but instead, it is a luxury carriage built with full suspension from the 17th century, and a virtual chauffeur. just like the present day drone, the Maybach Berline is remotely controlled via satellite, thus there is no busybody chauffeur poking his noses into how’s Cindy’s party or whatever.

we can almost imagine how these cars would played out in their respective films and secretly that these were really upcoming Hollywood flicks that stars these automobiles but then, really hits us. they are, after all, concepts for the competition but lucky for us, there are some awesome images after the break to tie us over until they became a reality. oh, if you like to read, detail plots are in the PR information after the break as well.

Stars on four wheels for Hollywood

• smart develops the perfect reporter’s car, which can climb  up the facades of high-rise buildings and take to the air

For the 2011 Los Angeles Design Challenge, which is seeking to find the most spectacular new film car for Hollywood, the designers from the Mercedes-Benz Advanced Design Studios in Sindelfingen (Germany) and Carlsbad (USA), have joined the ranks of the screen-writers. Their efforts have borne fruit in the form of three visionary “hero cars” – a Mercedes-Benz and a smart, each perfectly cast in an action thriller, and a Maybach luxury carriage starring in a modern-day fairytale. The futuristic Mercedes-Benz Silver Arrow teams up with two crash test dummies to battle it out with the forces of evil. The smart 341 Parkour, which is able to climb sheer faces and take to the air, helps a young reporter to scoop the story of her life. The Maybach Berline brings a touch of magic into the life of a hapless Cinderella.

The designers at the Mercedes-Benz Advanced Design Studio in Carlsbad, California have created a Hollywood-style homage for Mercedes-Benz to 125 years of innovation in automotive technology and design. The leading  roles are played by two high-tech characters which have been instrumental in reconciling safety and stylish design in automobiles: the Mercedes-Benz Silver Arrow cult racing car and crash test dummies.

The film ”Silver Lightning“ is set in the near future, in an age of artificial intelligence. Two crash test dummies by the names of Hans05 and Franz02 take on evil ruler Dr. Crash-Barrier to save their beloved Mercedes Silver Arrow. They engage in an action-packed, nerve-jangling duel with the ruthless battering ram before finally outfoxing him. The Silver Arrow is a low-lying sculpture on wheels. A feat of technical innovation is the diagonal, hubless roller which allows steering in all directions. The futuristic Silver Arrow’s proportions are reminiscent of the legendary sports car from the late 1930s and the Uhlenhaut SLR from the 1950s.

”Annie get the Grannies“ with the smart 341 Parkour

For smart, the designers at the Mercedes-Benz Advanced Design Studio in Sindelfingen have created a revolutionary all-rounder. The smart 341 Parkour is equally at home driving along the road, climbing up the facades of skyscrapers or even taking to the air. The occupant cell is completely transparent and offers the very best all-round visibility – the perfect vehicle for a fast-paced reporter story.

For the plot of the film ”Annie get the Grannies“, the designers have taken the visionary smart concept with which they won the Los Angeles Design Challenge last year as their starting point. Last year, the smart 454 was knitted from carbon fibres by so-called ”smart granny robots“. These high-tech robots equipped with knitting needles have now been revived. On reading in a newspaper that the incredible robots have disappeared, the young reporter Annie Angle from Cantpark City scents the story of her life. Armed with a professional camera, she sets off to investigate in her smart 341 Parkour.

Cinderella and the Maybach Berline

For Maybach, Mercedes-Benz’s interior designers in Sindelfingen have created a modern reinterpretation of the classic ”Berline” a luxury carriage with full suspension from the 17th century, for a remake of the Cinderella fairytale. Hapless Cindy toils day-in, day-out helping her father to develop the Maybach Berline, while her step-sister enjoys the party life. On her birthday her father allows her to travel into town in the prototype of the luxury carriage. She goes to a dance, where she meets an attractive man and loses all sense of time. As she has to be home by midnight, she suddenly dashes off, losing one of her red stilettos in the process. Her dancing partner runs after her with the shoe. Overjoyed, Cindy boards the Maybach Berline and is driven home by a virtual chauffeur.

The Maybach Berline is remote controlled via satellite like a drone, allowing the occupants maximum space and absolute privacy. The chauffeur is based at the Maybach Virtual Chauffeur Center and can be spoken to at any time by means of a glass screen suspended from the roof lining. Every conceivable entertainment feature can also be activated via this screen. Copiously appointed with wood, the interior is designed in the manner of a royal lounge in which the passengers face one another on two comfortable individual seats. Similarly to on a business jet, the passengers board and alight from the vehicle by means of a two-piece swing-wing door with a horizontal split, whereby the lower section folds out to form a step unit. The sides of the carriage have extra-large windows which can be set such that they can only be looked through from inside the vehicle. They can additionally be used as interfaces.

Dates and facts at a glance

The film vehicles from Mercedes-Benz, smart and Maybach

Design: Low-lying sculpture on wheels which is reminiscent of the legendary Silver Arrows from the 1930s and the Uhlenhaut SLR from the 1950s
Special feature: Steering in all directions by means of a diagonal, hubless roller
Film title: Silver Lightning

Design: Modern reinterpretation of the ”Berline“ luxury carriage from the 17th century with two-piece horizontal swing-doors which exploit the special proportions of a carriage: high body  and maximum space for occupants
Special features: – Autonomous driving via satellite controlled   from the Maybach Virtual Chauffeur Center  - Royal lounge character inside, with two facing   individual seats - Glass screen suspended from roof lining for   communications and entertainment - Extra-large windows, which can also be used   as a screen and can be set to shield off the   interior from the outside world
Film title: Cinderella and the Maybach Berline
[/toggle]