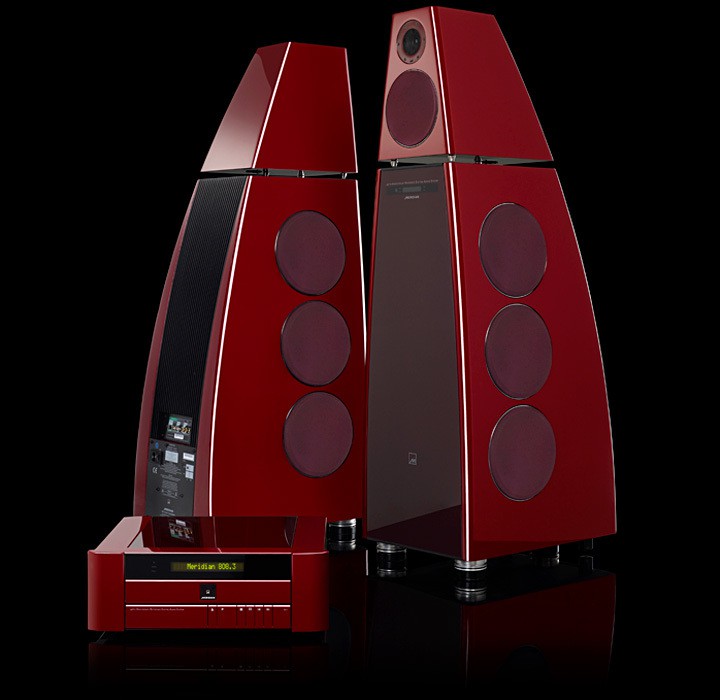 this year marks the 40th years of Meridian Audio and it is also the Ruby Anniversary between founders Bob Stuart and Allen Boothroyd’s creative partnership. celebrating this glorious occasion Meridian Audio is launching a special limited 40th Anniversary System that comprises of a special edition of its reference 808 CD and Meridian Sooloos Player, along with a pair of DSP8000 Digital Active Loudspeakers. based on Meridian’s most advanced audio system to date, each component is given an unique, distinctive and one-off paint job in a specially mixed Ruby Red finish and contrasting driver bezel. each of the unit is built from hand-selected components and sport individually-adjusted performance enhancements to even better an already stunning audio reproduction.
[ad#Google Adsense-text-468×60]

adding to its exclusivity, only 40 of this 40th Anniversary System will be made available. along with the system, is a hardbound system user guide with details on Meridian’s history, and also its loudspeaker design and philosophy, signed by the duo themselves. needless to say, you will require a pretty huge pockets to swallow this exclusive system, though we don’t have the exact amount (Luxury Launches indicated that its about $100k) but like all things in life, it might be a better idea to hear from the horse’s mouth. head on down to Meridian Audio website for more info. hit pass the jump for more images and the official PR tidbits.

With more than 165 international awards bestowed on their product designs, the two founders of the British luxury brand Meridian Audio celebrate 40 years since their creative partnership began by collaborating once again to produce a special limited edition 40th Anniversary System comprising an enhanced pair of the company’s flagship DSP8000 Digital Active Loudspeakers and a special version of their 808 Signature Reference CD Player. This exclusive system offers the ultimate listening experience for true music aficionados.

NOW READ  Surprise! Apple HomePod Is Back And Now With Matter Support

Limited to only 40 numbered systems world-wide, each is signed by Bob and Allen, and bears an engraved plate showing its unique system number. The 40th Anniversary System includes several unique additions that make it truly special, exuding elegance and flair, with an exclusive “Ruby” finish – not available on other products in the range – with coordinated glass inset panels, loudspeakers grilles and tweeter surround. Even the drivers are treated with a new, polished bezel. Each system will also come with an extensive user guide, also signed by Bob and Allen, including articles on the history and design of Meridian’s exceptional Digital Signal Processing (DSP) loudspeakers.

Owners of the Anniversary system will be offered the opportunity to receive a Meridian Engineer to fine-tune the sound system in their homes following installation.

The 40th Anniversary System exemplifies the state-of-the art sound technology for which Meridian is respected.

From the beginning, Bob and Allen have synthesised the design and technology of all Meridian products, resulting in an unusual yet welcome symbiosis of form and function, winning numerous prestigious design awards along the way.  Allen says, “It is our job as product designers to create something people feel they can live with and take enjoyment in using, while instilling them with confidence that the product has longevity”.

Beyond extraordinary sound reproduction, Meridian has always set new standards for elegant, iconic design, as evidenced by one of Boothroyd and Stuart’s earliest creations – the original classic 1970s Lecson Audio system, which is a part of the permanent collection at the New York Museum of Modern Art.  During their 40-year partnership, Boothroyd and Stuart have won the coveted British Design Council award for Outstanding British Products three times – the only design pair to ever achieve this recognition. [/toggle]