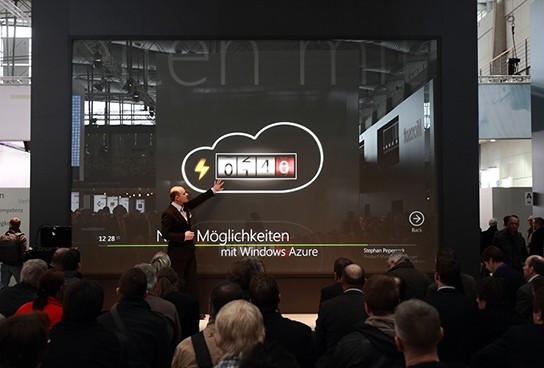 going big is the way to stand out. apparently, Microsoft Germany second that and had the folks over at Stereolize to create an ultra-huge 235-inches interactive touchscreen for their presentation at the CeBIT 2011 in Hanover, Germany. check out the video (with nice soundtrack) after the jump. the display is almost two time the height of the presenters and has complete touch and gestures functionality, well, at least up to the height an average presenter can reach. as witness from the video, the flicking and touching don’t seems to have any lack which oppose to my perception of a Microsoft OS. sorry dudes. years of Microsoft OS on desktop, laptop and mobile had evidently traumatized me. what’s more impressive was the humongous size display doesn’t induce any lack. awesome stuff!