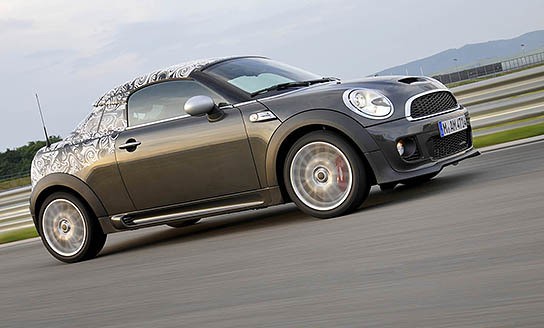 last week, Mini teases us with the full-engine lineup for its upcoming Mini Coupe. four level of trims are expected, namely, Cooper Coupe, Cooper S Coupe, John Cooper Works Coupe, as well as the Cooper SD Coupe. a range of diesel and petrol engines will leave buyers (at least for the European buyers) spoilt for choice. as we would have expected, the entry level model is the Mini Cooper Coupe that will be powered by a 1.6-liter naturally-aspirated (NA) four-cylinder that’s good for 122 hp (90 kW), while a 1.6-liter force-induction model, the Cooper S Coupe, pushes out 184 horses (137 kW). also under the 1.6-liter stable is the much lauded John Cooper Works Coupe that develops a healthy 211 hp. there’s also a Mini Cooper SD Coupe fitted with a 2.0-liter turbodiesel four-cylinder that’s packed with 143 horsepower (105 kW) and 225 lb-ft (305 Nm) of torque.
[ad#Google Adsense-text-468×60]

transmission will be six-speed manual across the board, with the exception for Mini Cooper S Couple, Mini Cooper Coupe and the Mini Cooper SD Coupe, which will be offered a six-speed automatic as an option. details on pricing and availability remains scarce but we expect it will be sooner than we have imagined. don’t ask me why, but it’s basically gut feel.