i am sure when Montague said the Montague Paratrooper Folding Bike was developed for airborne soldiers, aka paratroopers, to drop out of airplanes, they are not referring to soldier of recent time, cos’ we hardly think that bikes will be transport of choice in the battlefield, but we might be wrong. nevertheless, whatever that’s good enough for airborne troopers, it is definitely good enough for average joes. in any case, being built for paratroopers, the Montague Paratrooper Folding Bike is without doubt built tough and naturally, foldable to a compact package to allow it to be brought onto a flying craft and subsequently, jumped off (or rappel) with the soldiers.

awesome features of this 24-speed bike includes Promax mechanical disc brakes front and back, custom drawn aluminum frame with Folding Integrated Technology, generous 80mm of suspension travel and knobby tires for taking on nearly any terrains, Shimano derailleurs, and patented CLIX system that allows the bike to folded in less than 20 seconds without any tools. the whole package is finished in a beautiful matte cammy green paint job that totally befits its purpose – though you probably won’t be jumping off a Cessna with this, but still, it is cool to have the military look. you know. it is a man’s thing. the Montague Paratrooper Folding Bike is up for grab for $849.

btw, this bike is incredibly light; it tips the scale at just 29 lbs or about 13 kilograms. have another look after the break. 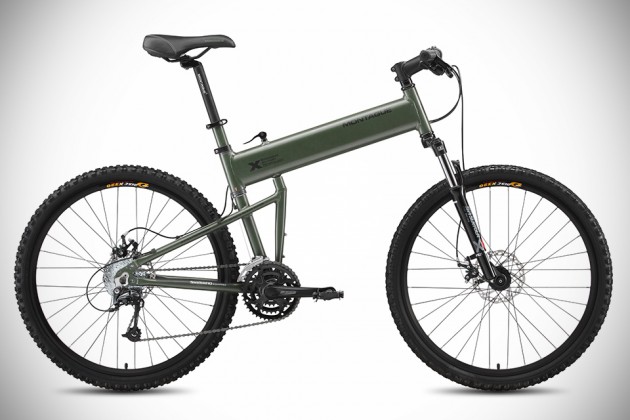