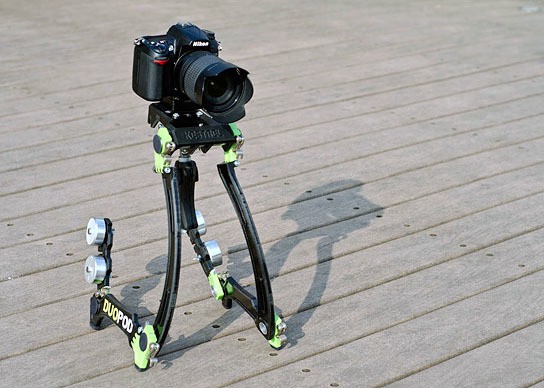 DSLR videography enthusiasts and professional alike can look forward to a new and exciting way to mount your hybrid DSLR. introduced by Curve Creative‘s brand, Mountkestrel, the Duopod is a innovative hybrid DSLR mount that can be quickly transformed into a shoulder or chest mount, or put into its neutral position to be used as a tripod and thanks to its steel weights counterbalancing, it can even carry out the steadycam duty. certainly sounds like a dream mount for DSLR videographers. well, nothing speaks like a video clip, so hit the jump and check out the product video of this wonderful camera mount solution.
[ad#Google Adsense-text-468×60]

the Duopod, and the brand Mountkestrel were born out as part of a final year industrial project in NCAD, Dublin, which also means that it is a concept design. unfortunately as it is, there is still hope for those who wish to get their hands on one (though not as soon, but eventually). people with keen interest in this product can register their interest via Mountkestrel’s website, and hopefully, if the product garners enough interest (and backing) it might just become a reality.