Mars is currently explored by robotic rovers, but in future, it will be done by humans and the futuristic vehicle you see here could be the Mars-mobile of choice. Built by Parker Brothers Concepts with advice of NASA engineers, this futuristic military-ish 6,000 lbs (2,721 kilograms) six-wheeler has room for up to four passengers and not surprisingly, it can also serve as a mobile laboratory when roaming around the Red Planet. The vehicle may look small from the image, with a rather large cockpit to body ratio, but looks can be deceiving as it actually stretches a lengthy 28 feet (8.5 meters) long, 14 feet (4.3 meters) wide and 11 feet (3.3 meters) tall. 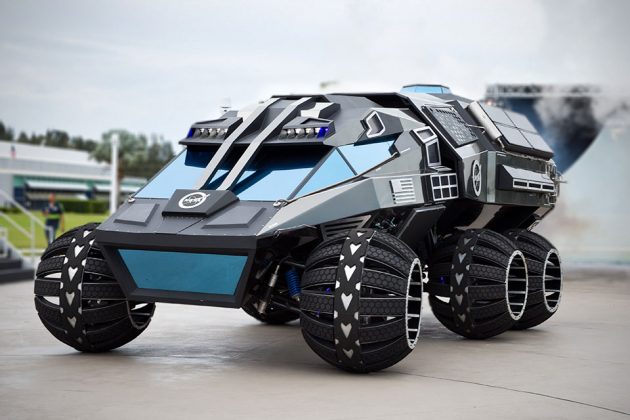 Like the Curiosity, Mars Rover Concept is powered by an electric drivetrain which draws energy from a 700V battery pack while solar panels supplement the power it requires to perform low-speed observations. The electric motor enables up to 70 mile an hour (112 km/h), however, its purpose is not to make land speed record on Mars; instead it will be making a steady 10-15 mph (16-24 km/h) cruise most of the time (in Mars’ atmosphere, in we may add) and looking at the terrains Mars has to offer, it is unlikely to be going at speeds, well, that’s unless the crew happened to be pursue by aliens. Then again, that is also probably an unlikely scenario.

Anyways, speaking of terrain, the vehicle is obviously designed to handle the unforgiving and harsh conditions of Mars and therefore, it is outfitted with rugged suspension system with an unusually high ground clearance, and massive 50-inch air-less wheels, which appears to be part of the suspension system. The NASA Mars Rover Concept was unveiled at the Kennedy Space Center and on display as part of the Summer of Mars exhibition at the Visitor Complex from now until end of June. After which it will tour the U.S., hitting up the East Coast cities like Atlanta, New York City, Jersey City, and Washington, D.C. Skip ahead to catch the event launch video.