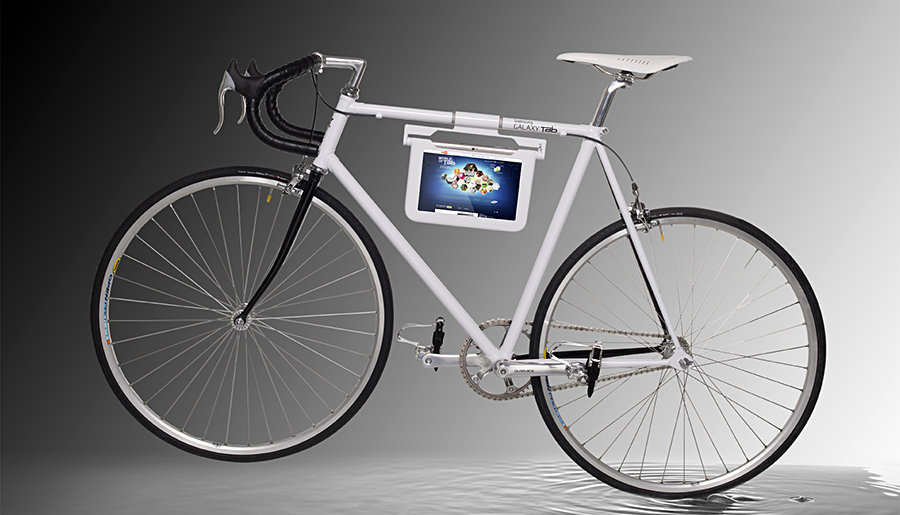 normally, when we talked about tablet accessories, we think stylus, cases and stuff like that but that was before Samsung announced the Samsung Galaxy Bike. Samsung UK has teamed with bespoke bike maker, 14 Bike Co (that’s the bike manufacturer firm’s name) to create this custom hand built pedal power two-wheeler with custom black and white paint job and a removable carbon fiber holder that fits Samsung’s Galaxy Tab 10.1. honestly, i can’t see the point in having this bike-cum-holder accessory except to put the tablet through a test of the elements. apparently, the holder is designed by F1 manufacturers and is touted to be super light weight (125 grams, to be exact) and has a super strong premium finish.
[ad#Google Adsense-text-468×60]

why would anyone want to hang a tablet to their bicycles is beyond me but apparently, the tablet will allow for applications such as dashboards tracking mileage, route planners and repair instructions for punctures, to be installed, thus enhancing “everyday cycling routes or more adventurous trips.” i still don’t quite get it cos’ its kind of dangerous to be using a tablet on the move, on a two-wheeler or either that, you have stop and use it. whichever way it is, i still can’t fathom the rationale. perhaps, a smartphone mounted on the handle would have been a more logical choice. no word on the pricing and availability, but reassure that this will be the biggest and most expensive tablet accessories that money can buy.

via Engadget via SlashGear