Those cylinders sticking out of the vessel you see here are sails. However, as you can see, it is not the typical sails you are familiar with. Technically, it works like a sail and therefore, you can still call it a sail, but instead of providing an area of resistance for winds to push the craft along, it harness the wind power to leverage on the phenomena called Magnus Effect. Though Magnus Effect is a phenomenal, unlike Bernoulli’s Principle, the principle behind is largely the same. 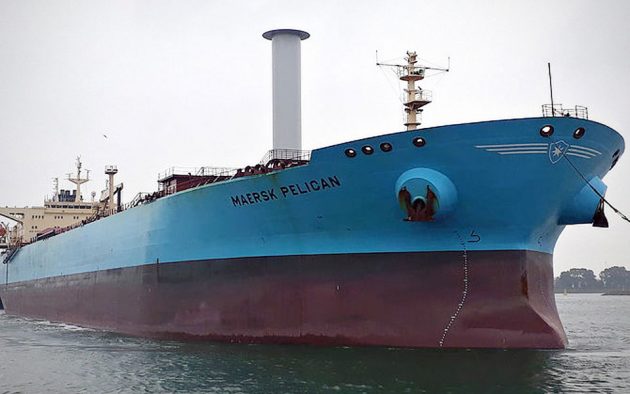 As the Rotor Sail spins, it drags air around, creating an area of lower pressure on one side of the object which “pulls” (or sucks, if you will) the object forward and thereby achieving forward motion for whatever that it is attached to. But it is worthy to note that Magnus Effect is not Bernoulli’s Principle. This is best sum up by one Quora user, Kim Aaron, who has a PhD in fluid dynamics from Caltech:

“This is a bit like the question that comes up frequently asking if Bernoulli’s Principle causes lift on a wing.

You can’t compare a phenomenon (Magnus Effect) to a calculation scheme (Bernoulli’s Principle). They’re not commensurate. It’s a bit like asking what’s the difference between the height of a mountain and the speed of a train. Actually, it’s even worse. At least height and velocity are both physical descriptions with physical dimensions. They are more alike than a phenomenon and a calculation scheme.”

But how does it help to reduce the vessel’s carbon footprint, or how is good for the environment in general? Well, about this… since now the rotor sails can help the vessel move forward, the ship will be able to throttle back and therefore, saving fuel. It is like hybrid vehicles where the electric motor could take over the duty of propulsion and the fossil fuel engine can take a breather, thus saving on gas. However, in the case of hybrid vehicles, it is a complete takeover. 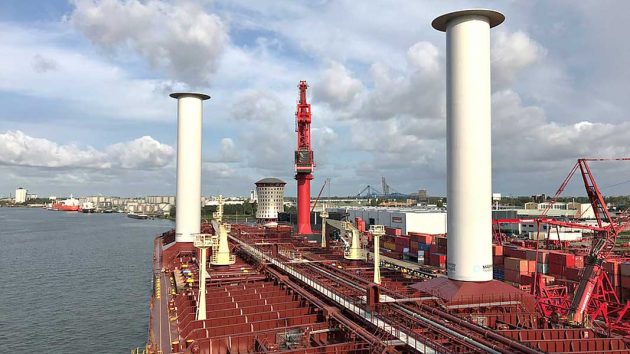 At this point, Norsepower appears to be supplementing the propulsion, allowing the cut back on engine throttle while not sacrificing speed. In an ideal situation, these rotor sails should be able to power the vessel entirely to result in even more savings. Rotor Sails sure sound like a fantasy tech, but the good thing is, it is not.

Rotor Sails have been installed onboard Bore’s Estraden since 2014 and, based on “independently verified results,” the technology has proven to cut average fuel consumption by over 6 percent. Norsepower said with larger Rotor Sails installed in “areas with favorable wind conditions,” it could save as much as 20 percent in fuel consumption.

OK. 6 percent plus may not sound like a big deal for a single vessel, but shipping behemoth like Maersk, who spends over $3 billion on fuel a year, this is going to be major savings. Needless to say, if a giant like Maersk can save this much, it is a good thing for the poor little blue marble that is said to be running low on fossil fuel soon than expected.

Adding to the good news is, Norsepower Rotor Sails Solution is not limited to cargo vessel like Bore’s Estraden; it can be applied to tanker, cruise-ferry, or any ship that has the space to spare. You can learn on the saving aspect of this technology in the video after the post.