I don’t know how managed to miss this goofy product from the world’s most famous fried chicken chain, KFC. Back in may, KFC commemorated Memorial Day with a sweepstakes for fans to have a shot at winning what it calls “summer’s must-have pool float,” a limited-edition KFC Colonel Floatie. Yes. It is a pool float shaped after the iconic figure of Colonel Sanders. 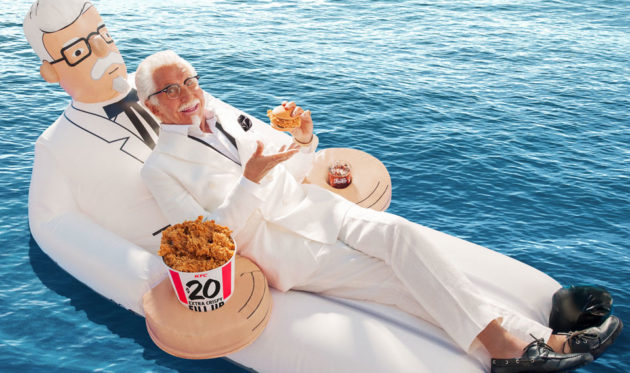 Colonel Sanders was made into a pool float and yes, it is totally rideable. It floats on his back and with his “hands” forming a placeholder for, wait for this… a bucket of Kentucky Fried Chicken and a cup of your favorite beverage. But why a KFC Colonel Pool Float? Obviously, it was clever and fun marketing campaign, which KFC is never a stranger to. Here are the official words:

“We wanted to create the perfect vessel for enjoying the Crispy Colonel sandwich (or a bucket of Kentucky Fried Chicken). Enter the KFC Colonel floatie… now hundreds of them will have the chance to enjoy their new favorite chicken sandwich (or a bucket of chicken) while floating in their favorite body of water, atop their favorite KFC Colonel-shaped floatie.”

Forget about unicorn float or coffin float because, for hardcore Kentucky Fried Chicken lovers, there is only one float and that would be the KFC Colonel Pool Floatie. Personally, I am not a huge fan and also, I think lying atop of on the Colonel seems rather inappropriate. It is just weird due to, you know, the position of the rider to Colonel’s ermmm, you know where. Just saying…

NOW READ  Man Who Married A Hologram Character, Took Her To A Dinner On Christmas Day