While businesses all over the world are looking to drones for delivery, America’s meat produce chain Oscar Mayer who is more noted for its hot dogs and its food truck), has embarked on something a little faster and more personal. Meet the Super Hotdogger, a hot dog superhero who will deliver hot dogs to customers this summer on a custom jetpack by JetPack Aviation. 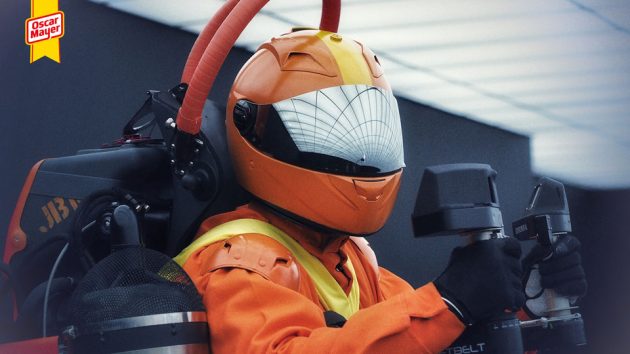 Whether or not this hot dog superhero will actually deliver hot dogs to anyone is unknown. I suspect it might just be an elaborate marketing stun. The jetpack is real, though, but we doubt the regulations would allow free flight of this thing to anywhere in stateside, at least not now. Besides, I hardly think it will have the range to cover any serious mileage to get to where the hot dogs need to be. That’s not to mention that the limited number of sausages Super Hotdogger can carry. 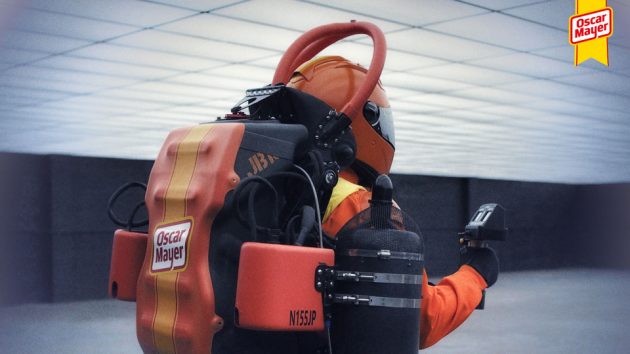 Speaking of payload, hot dogs are packed inside custom zippered holding pouches (much like in-ear headphones case, but hot dog with bun size), attached to the pilot’s utility belt. As you can imagined, there are just so many hot dogs this superhero can bring with him/her on any given trip. The cost per hot dog delivered must be through the roof because, it is a jetpack that we are talking about here. 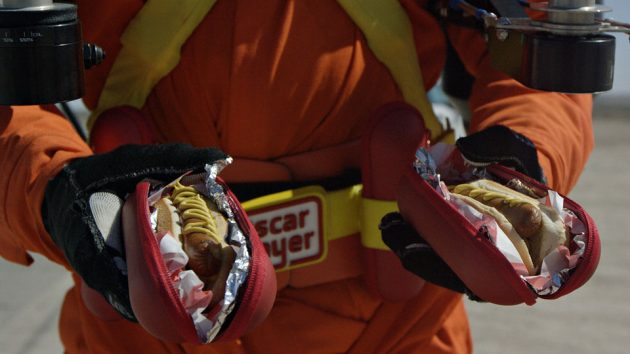 Oscar Mayer Super Hotdogger Jetpack and its helmeted pilot, whose identity is unknown, has reportedly made a public appearance in New York City on this week’s Monday and it won’t reappear until in July in Chicago. For those not familiar with Oscar Mayer, the hot dog specialist has assembled a fleet of marketing/delivery transportation last year which it aptly named Wienerfleet – all sporting the familiar Wiener-inspired shape in tangy-red and yellow livery. 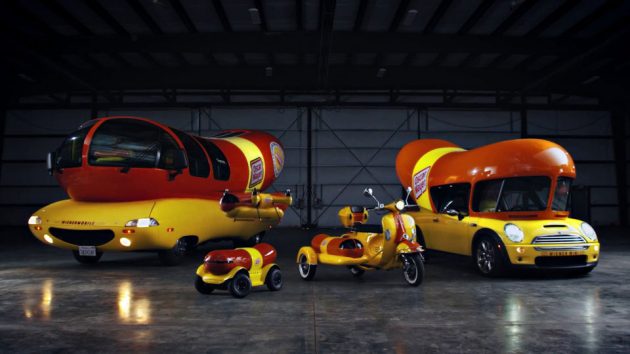 In addition to the iconic Wiener-shaped food truck, Wienerfleet also includes a Mini Cooper-based Wienermini, an unmanned vehicle called Wiener Rover, a Vespa with a sidecar in the shape of a Weiner, aptly called Wienercycles and the Wienerdrone, a drone that takes hot dog delivery to an even greater height (though not quite efficiency as far as payload is concerned). Out of the six delivery modes in the fleet, it looks like two of them, namely drone and jetpack, are nothing more than marketing stuns (mostly due to regulations and also its meager payload).

Keep going for the Super Hotdogger Jetpack promo video as well as an Oscar Mayer Wienerfleet introduction video from summer of 2017.