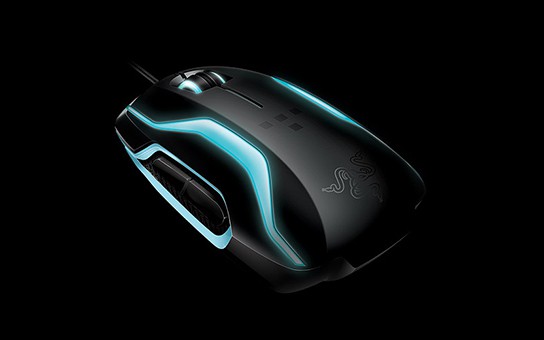 if you feel all grown up and the toy TRON Zero G Light Cycle isn’t your cup of tea then the TRON Gaming Mouse might be an alternative for fans of TRON. video games and other product movie tie-ins are not uncommon but not a common thing for gaming peripherals.

TRON Gaming Mouse features 5600dpi Razer Precision 3.5G Laser Sensor and an ambidextrous design which is both left and right hand-friendly. of course, there’s the ‘compulsory’ iconic blue lights trickling all over the mouse. other features include light and sound effects at startup and shutdown, lighting alerts, seven Hyperesponse buttons, ultrapolling and the now-common-to-Razer braided USB cable. END_OF_DOCUMENT_TOKEN_TO_BE_REPLACED 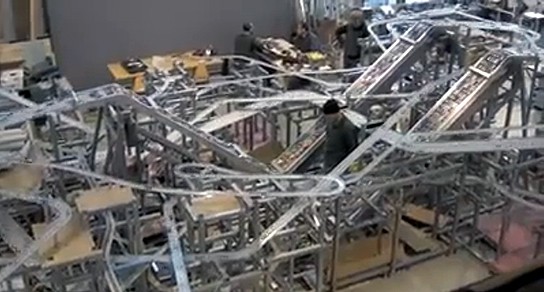 Hot Wheels toy has come a long way. i used to collect them, specifically the Volkswagen Mini Buses and Drag Buses, and some Red Line series items. naturally, i sprung up straight on my chair and get all excited when i came across this fully-automated tracks that has 1,200 of this tiny die-casts whizzing around in roller coaster ride – over and over again. END_OF_DOCUMENT_TOKEN_TO_BE_REPLACED 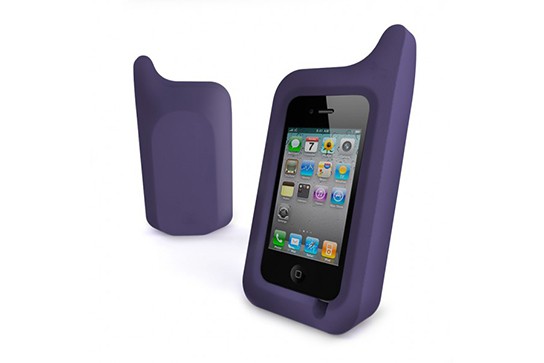 while every iPhone case manufacturers are striving to make their iPhone cases as slim as possible, these guys over at ArkWhat chose to go the opposite way by making their first iPhone case as chunky as possible. dubbed ArkHippo I, this drop-proof iphone case is constructed of durable EVA material and literally add a chunk to your other wise slim iPhone 4.

if you’re always feeling paranoid about breaking your iPhone 4 glasses, slip on the ArkHippo in and your iPhone will be instantly protected by the thick spongy padding. the angled sides on the back also double up as a stand for both landscape and portrait mode. and guess what? you can even talk hands-free with this case by clamping your phone between your cheek and your shoulder. pretty sweet, but its going to be a pocket bursting size phone. if i were to get this, my iPhone 4 is definitely going to be in the bag with my iPad. there’s no way this 2-inch thick chunk is going to fit into my pockets – but then again, it may fit into my cargo’s side pockets.

so what’s with the antenna stub? well, we can see what the guys at ArkWhat is coming from: getting back old-school with yesteryear chunky mobile phone. speaking of which, the ArkHippo do look a little like the Motorola Microtac with the extended battery on. the ArkHippo I comes in a choice of seven colors.

check out the video below. 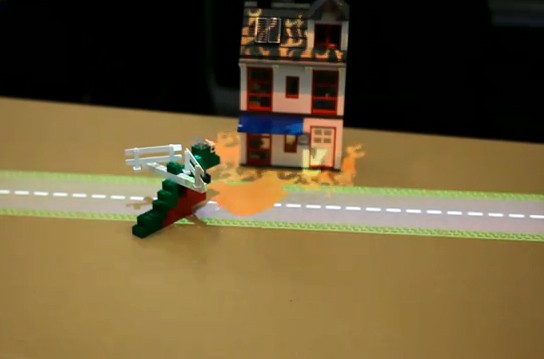 Intel Labs Seattle has been toying with a series of techniques and Kinect-style depth cameras. among them is something called Object Aware Situated Interaction System or OASIS. what it does is combining depth cameras with micro-projectors to enable recognition, tracking of objects and gestures. two videos were showcased using this development and the LEGO playing scenario definitely catches my eye.

the OASIS has thus, makes imagination a think of the past when playing with LEGO. however, i thought this system would be great for puppetry-like story telling for children where the system plays out the additional animated visuals to aid the story telling when toys are used. on a second thought, would this predetermine scenario hampers a child’s imagination? or maybe adding a mind-reading/control device which translates the child’s thought into animated sequences? scary thoughts but it should at least encourage imagination in a child.

admittedly, i was totally captivated by OASIS (the LEGO scenario, to be specific) and can’t stop thinking about its potential. if only if the projections are in holographic 3D….

check out the video below. trust me, you won’t want to miss this. 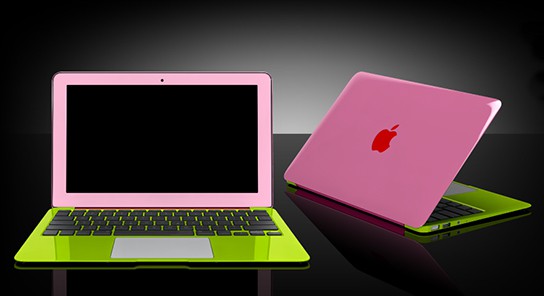 if you already own a ton of recent Apple products, chances are you might be tired of the trademark silver/grey look. so before you lay your hand on a brand new MacBook Air, why not give it some colors of your choice? Ferrari Gloss Red MacBook Air? Cotton Candy Pink Apple logo? why not? END_OF_DOCUMENT_TOKEN_TO_BE_REPLACED 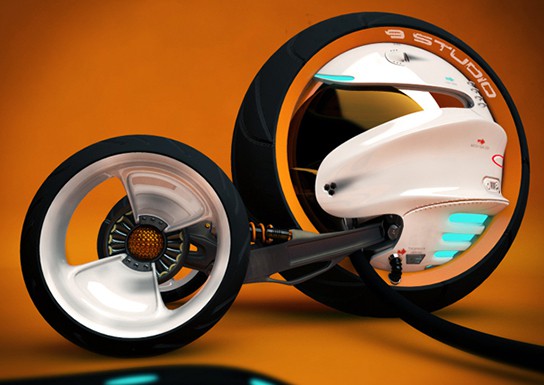 we love concepts (design). concept means it is… well… a concept. concepts are dreams of designers and engineers, hence it can be wildly conceived and likely will not see to real-life production. one thing we have to admit, concepts do excites us. it gives hope and insight into our future. well, here’s another concept from designer Artuto Arino R that tickles our imagination: the Phase 2.0 All-terrain Three Wheeler. END_OF_DOCUMENT_TOKEN_TO_BE_REPLACED 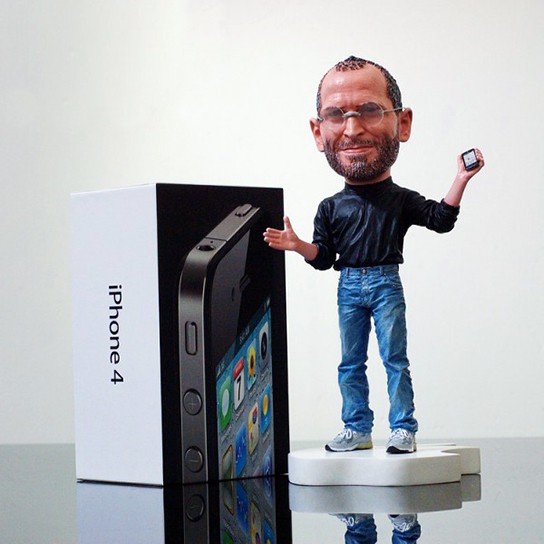 just yesterday, Apple fanboys would be thrilled to own one of this unofficial Steve Jobs Action Figure. well… you can’t anymore. M.I.C gadget has been notified by Apple to stop marketing and sale of this figure. how unfortunate. for those who already claimed yourself one of this, you are just so fortunate! this item is now officially a rare collector item. END_OF_DOCUMENT_TOKEN_TO_BE_REPLACED 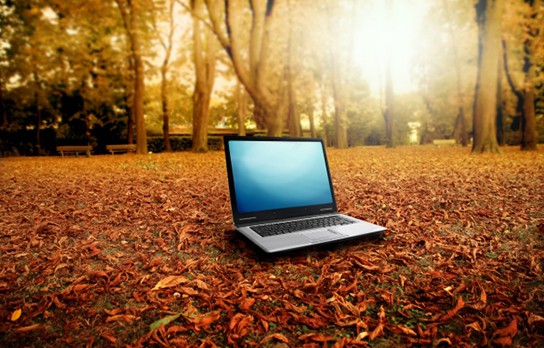 according to an article on CNET UK, some tree-huggers over at Dutch city of Alpen aan den Rijn commissioned a study to investigate if this is indeed happening. this initiative was carried out after abnormalities was found on trees not relating to viral or bacterial infections. the study lasted for five years with result showing that all deciduous trees in the western world are affected by radiation from mobile phone networks and wireless LANS.

the aforementioned abnormalities include trees displaying signifiant variations in growth, bleeding and fissures in their bark. these symptoms was termed as Wi-FI sickness. apparently 70 percent of the trees in urban Netherlands are affected by this Wi-Fi sickness which signified a 60 percent increased compared to five years ago.

although there hasn’t been any conclusive proof as to whether Wi-Fi is harmful to humans or not, i have a hunch that there in lies a longer term health issue for us. personally, i thought this isn’t limited to just Wi-Fi, but to other forms of radio waves such as mobile phone signals and bluetooth transmission.

there are many factors around that could hamper a conclusive study for the effect of these signals on human beings. ever since the popularization of mobile phones, it was surrounded with controversies and speculations including mobile phone signals could potentially disrupts medical equipments and aircraft instruments. if these are conclusively proven to be true, then i see no reasons why human bodies will be exempted from this effect.

according to CNET UK’s article “Wi-Fi is killing trees, study finds“, “our exposure to radio signals from Wi-Fi is well below government safety levels, and much lower than from mobile phones” but does it mean we should feel safe? i am wary about these signals that can pass through walls, because if it passes through walls, it is passing through us at any given time – even right at this moment as i am composing this article.

it appears that “we have to live in a Wi-Fi hotspot for a year to absorb the same among of radio waves as you would from a twenty minute phone call”. how assuring that was. does this statement include periodical exposures? if yes, than i would have, at the very least, made 60 minutes of phone call to date. now, that’s not quite a good news, isn’t it?

the fact remains that the majority of us can’t live without the Internet and mobile phones. as we use the Net more, we demand more speed and more freedom of access. hence we go wireless, even in our homes. i bet most folks who has Wi-Fi at home don’t switch them off and as result we are exposing ourselves by our own accord. if Wi-Fi is harmful, then wouldn’t it be a situation where we’re intentionally setting up our own death trap? if there was a slightest hint of harm from Wi-Fi signals (to us, animals and trees included) or any other types of radio waves for that matter, would we stop using these technologies?

i don’t know. i can’t imagine life without any connectivity, let alone telecommunications via mobile phones. basically, i can’t live without the Internet and, to some extend, Wi-Fi as well. being a gadget person, i dread the day when we realize the truth that radio waves, regardless of its nature, hurts. meanwhile, i would just cross my fingers and hope that radio waves are just fine. 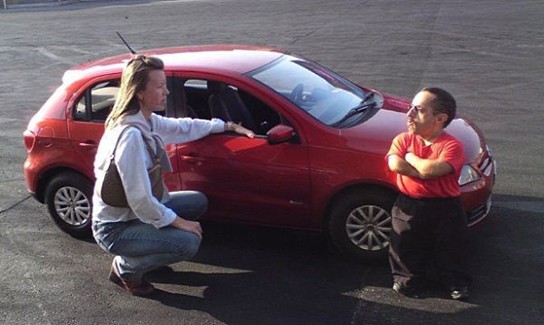 even the word compact sounded too big for this car featured here. i doubt the word ‘sub-compact’ is even suitable. Volkswagen Brazil has built a mini-Gol, a super-subcompact car based on the budget priced compact car Gol which has been sold in Brazil since 1980. the mini-Gol was built with little people in mind. by little people, we mean people who are 1.53m and below. END_OF_DOCUMENT_TOKEN_TO_BE_REPLACED 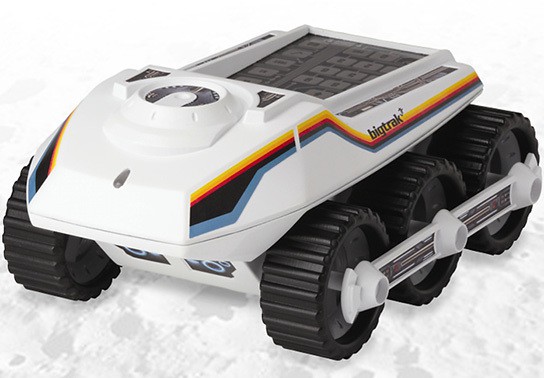 while automobiles of the yesteryear are making a come back with modern technologies, toys are not missing out the resurrection party either. now get ready for BigTrak Junior – a compact (almost) palm-size brother of the original BigTrak from the 80s. yes, there are more to 80s than just shoulder pads. when personal computer was just at its infancy (in the 80s), a toy with the ability to be programed was a big thing and i bet it still stands true today. take it as a budget alternative to LEGO Mindstorms.

the BigTrak Jr has inherited the programming ability of the senior BigTrak plus some functions from the 21st century thrown in for good measures. to operate, simply punched in the desired commands, hit ‘GO’ and witness the BigTrak executes the sequence autonomously. this six-wheeler space rover can travel forwards, backwards, turn left and right. you can even program it to fire its ‘photo’ cannon while its executing its tour of duty.

there are a couple of 21st century technologies thrown in such as the memory save function which allows you to write and save the program for future use. there is also an unique ‘active’ accessory port allowing it to utilize a number of add-on accessories (coming soon in 2011) to carry out its mission. some of the planned accessories include webcam and foam rocket launcher. sounds like quite a load of fun. soon BigTrak can do more than just patrolling round the supplied ‘moon crater’ obstacles but ‘transform’ into either a reconnaissance vehicle or an mobile artillery unit.

i would love to see a BigTrak as Radio Control vehicle plus the webcam and foam rocket launching ability. how about a gyroscope built-in to enable firing on the move? nah… i am just kidding but it will be good to have, isn’t it?