Everyone like banana for different reasons. Some love it because it is loaded with vitamins, some love it as a fruit and then there are some who love it because it brightens their day. Ok. Maybe regular, organic bananas can’t light up the dark (if it can, don’t ever eat it!), but the Seletti Banana Lamp designed by Belgium-based Studio Job certainly can. At a glance, it looks like a real banana, half-peeled and coated in luxurious gold, but it is really a desk lamp. 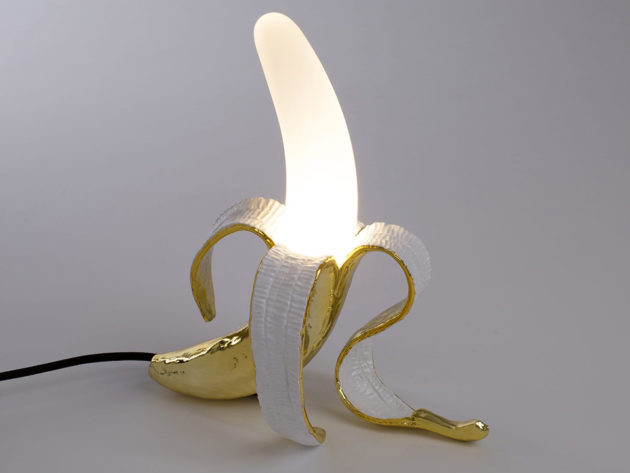 Made from a combination of resin and glass, Seletti Banana Lamp designed by Studio Job is described as “referencing pop art and popular culture at the same time” just like the studio’s larger banana bronze sculptures. How so you ask? Well, to be honest, I have absolutely no idea what it is trying convey and I don’t want to pretend I do. All I know is, it looks kind of neat and that’s all it matters. Though I can’t say the same about the pricing, but more on that in a sec.

Three models of Banana Lamp are offered, each differing by how it is positioned, and named after the three nephews of Disney iconic character, Donald Duck. Why? Beats me. I don’t recall Huey, Dewey, and Louie had a thing for bananas and surely they aren’t monkeys, are they? So… Anywho, if you are up for it, you will be elated to know Seletti Banana Lamp is not a forbidden fruit. It is can be yours to own if you are willing to drop $340 for a unit. Ouch. That’s kind of hefty, isn’t it? Then again, when Seletti produces this lamp penned by Studio Job, I am pretty certain they aren’t monkeying around. Definitely not for the faint of heart. The price, I mean.

NOW READ  This Desk Lamp Balances On Any Pivot Point, Doubles As A Therapeutic Desk Toy