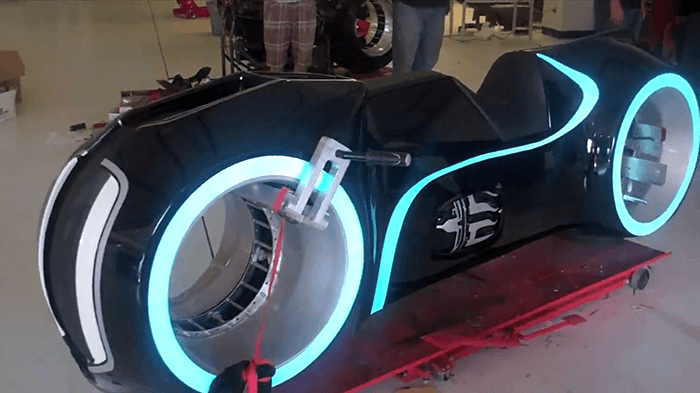 TRON fever has probably died down by now but that hasn’t stop custom chopper builder Parker Brothers Choppers from giving their original gas-guzzling Lightcycle project an extensive body rework and for some eco-friendly measures, it is given a 96-volt electric motor, juiced by a lithium-ion battery pack that’s said to offer a top speed of more than 100 mph (160 km/h) and a range of 100 miles (160 km) on a single charge. recharging is said to takes only a mere 35-mins. though i am not a true fan of electric vehicles but still, a full-electric version of this neon-light packed two-wheeler is at least closer to its big screen counterpart. there’s no indication of whether the electric-variant of the Lightcycle will be available for purchase. however, their gas-guzzling model is still up for grab via Hammacher Schlemmer for $55,000. hit past the jump for a video of the all-electric Lightcycle in action.
[ad#Google Adsense-text-468×60]