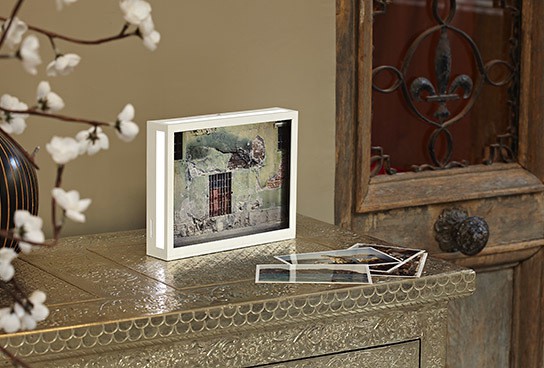 we thought this is the sleekest digital photo frame in the market right now. though we are not sure what’s the market sentiment for such a product but this Mac-ish wireless digital photo frame from PARROT boost an unique technology for image display. if you thought the photo frame’s image looks a little different, well, you are not wrong. due to the separate depth location of the screen and the backlight source which makes the photo frame looks somewhat like a lighted box. the translucent 10.4-inch screen has a resolution of 800 x 600 pixels and display photos in 24-bit color.
[ad#Google Adsense-text-468×60]

the DIA operates on Google Android OS which allows connection to the Internet directly with the photo frame. all you need is to connect a USB keyboard and USB mouse to its USB ports. other features include alarm function, automatic update over WiFi and auto adjustment of photo size to fit the photo frame screen. the PARROT DIA features a 200 MB built-in internal memory which can store up to 1,500 photos using Parrot’s optimized compression feature.

on the software front, the photo frame features integration with online services such as Frame Channel, Mobile Me, Picasa and Flickr. the DIA PARROT by NoDesign is truly a power house of digital photo frame and we believe you couldn’t anymore full-featured for a photo frame than this (and so does the price…).