Goodwood Festival of Speed is not all about cars we couldn’t afford or cars that money can’t buy. occasionally, automakers will be present with some cars that mortal can and would buy, like this Peugeot 208 GTi 30th Anniversary Special Edition. officially unveiled at one of the world’s most iconic motoring event, Peugeot further tweaked the 208 GTi to mark the 30 years since the first 205 GTi made its debut. unlike some car makers who chose the aesthetic-only route, the French marque opt to up the special model’s performance, albeit not by an insane amount, along with some drool-worthy cosmetics. powered by the new Euro 6 1.6-liter THP petrol unit pushing out 208 hp, which is an immediate reference to the model name, and a torque bump to 300 Nm (221 lb-ft), the 208 GTi 30th Anniversary is paired to a six-speed stick shifter that enables it to make the century sprint (0-62 mph) in 6.5 seconds. 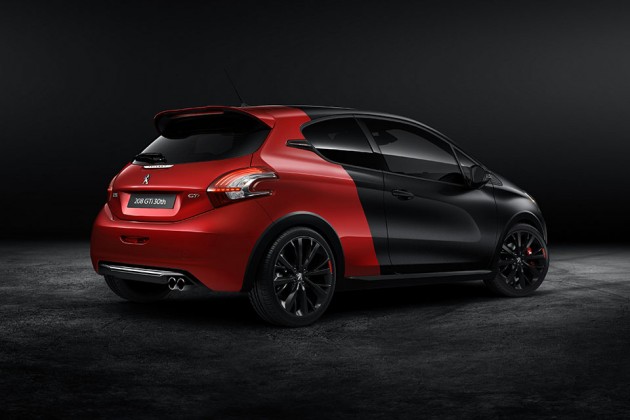 other performance enhancements that set this special edition apart from the regular 208 GTi include a specific suspension with 10mm lower ride hide, new damper settings and spring rates, revised anti-roll, re-calibrated ESP and traction control, wider front and rear track (20mm and 16mm, respectively), and 18-inch matte black wheels, wrapped in wide Michelin Pilot Super Sport 205/40 ZR18 rubbers. additionally, the commemorative edition is also blessed with Peugeot Sport branded Brembo brakes, rounded twin chrome tail pipes, a sleek two-tone paint job like those found on the 308 R Concept, and “208 GTi 30th” logo next to the quarter panels. after Goodwood, the Peugeot 208 GTi 30th Anniversary Special Edition will make its appearance at the 2014 Paris Motor Show, after which it will go on sale starting in November 2014.