thanks to the acquisition of Oculus Rift by Facebook, the interest in virtual reality has somewhat been rekindled, well, kind of. of course, Oculus Rift is by no means the only VR headsets being pitched around; there are actually a handful of them, but the problem is, they are either not ready for consumers or they are designed for commercial applications. bummer. but that was until now. Google seems to have answers to everything, both on and offline and at yesterday’s I/O keybote, it has announced a DIY virtual reality headset known as Google Cardboard. yes, you heard that right. DIY VR headset. i.e. one which can actually make yourself out of, you guess it, cardboard. however, that’s just part of the hardware equation, while the other part is your smartphone running on at least Android 4.2 and obviously, an app to complete your DIY virtual reality experience.

the idea behind Cardboard is to make VR accessible to more folks and hence, the smartphone route. then why the cardboard? well, because it is something you can easily grab off your local hardware stores or online market, along with the other common items such as velcro, rubber band, neodymium ring magnet and a couple of lenses. so basically, all you have to do is cobble up your hardware, slips your Android phone in and fire up the Cardboard app. combining the DIY headset and the Cardboard app, you can experience VR first hand without out ripping a chuck out of your savings. with it, you can fly in Google Earth, watch YouTube on larger-than-life screen, scrutinize photo spheres and more. if that sounds like fun to you, then we think you might be as much a geek as us and if so, head on down to the official site and see how you can put one together. we are not going to lie. we are pretty dope about it and we can’t wait to put one together ourselves. go ahead and knock yourself out. 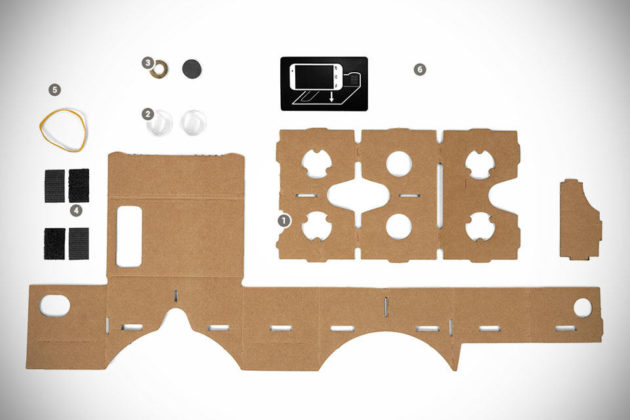