in our gadget life, we typically have a wall charger, a portable battery and probably a dock for a single device like the smartphone, which can be quite overwhelming. with the FuelBox PowerStation, it assumes the roles of all three accessories, packing them into one super sleek accessory. the FuelBox PowerStation consists of two parts: the Dock and the boostPack. the Dock features two surge-protected U.S. standard wall outlet, a USB port and a set of integrated cables comprising of a micro USB for Android or similar devices, a Lightning connector for newer Apple small devices and the old 30-pin Apple connector for older Apple small devices. the boostPack, on the other hand, is essentially a portable battery catering to your on-the-go power needs. both the Dock and the boostPack features a rubberized channel of sort that act as a rest shelf for your smartphone or tablet during charging. the beauty lies in the boostPack’s ability to dock to the Dock for recharging and at the same time, offering the same resting area for your device. 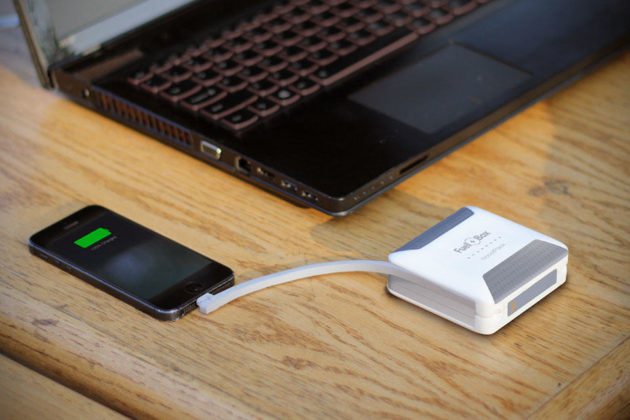 aesthetically, the FuelBox PowerStation wall charger and portable battery combo is a definite eye-pleaser and most importantly, it is one accessory that negates the need for many and frees up precious outlets for other devices and appliances. on the boostPack, you will also find the same trio of cables, neatly integrated into it and a set of LED indicators (eight of them for a more precise indication) that displays the battery status. according to FuelBox, the PowerStation designer and maker, the boostPack is capable of providing over 25 hours of extra power to your mobile devices and can also be recharged via computer’s USB port if required. available in three contemporary decor-friendly colors, namely moonrock white, carbonite black and astro gray, the FuelBox PowerStation wall charger and battery pack can be yours for just $79. shipment is expected to happen in October 2014. click past the jump for a product pitch video to learn more.