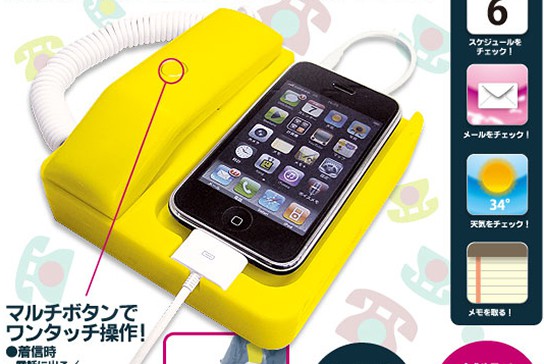 answering your iPhone while being charged can be quite an inconvenience and impossible if its docked. unless you have a Bluetooth headset paired with it. understanding this, a Japanese manufacturer came up with a novel idea: an iPhone dock that comes with a receiver, known as the PhoneXPhone. yea, receiver. you know those fixed line phone receiver?

designed to look like a typical fixed line phone, the Hashy Top-In PhoneXPhone spots a receiver for answering calls which connects to the base via the curly telephone cord. while your iPhone is in the cradle, you can still use the phone’s functions such as text messaging and other apps. the iPhone function through the receiver via a 3.5mm jack connected to the PhoneXPhone.