I bet the name Porsche 964 will leave non-enthusiast in confusion. Wait. Porsche had a 964? Yes. It did. And if you think it looked suspiciously like a 911, well, that is because it was in fact a 911. As matter of fact, Porsche 964 was the company’s internal name for the Porsche 911 made and sold between 1989 and 1994. Like any Porsche 911 before and after it, it was a model that was much revered by fans the world over, including EA’s Concept Artist Khyzyl Saleem. But clearly, Saleem one heck of a huge fan. A fan big enough to make him get down to work and design a, in his own words, “nice and simple 964, no wide body, just raw simplicity.” 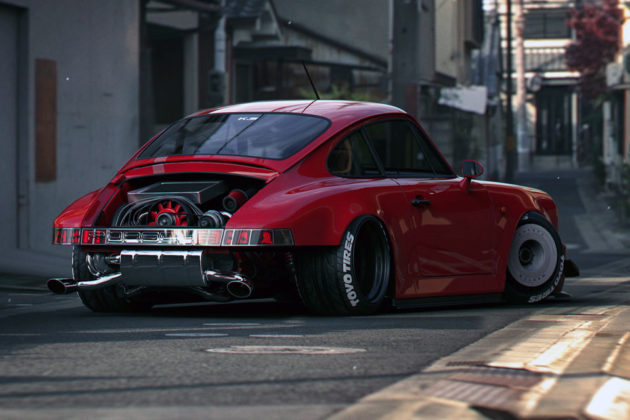 Aptly called Raw 964, it will definitely tickle the fancy of lowrider enthusiasts. Just look at it. The concept was slammed so low that it may be mistaken to sport no wheels at all. Never mind that a ride this low, coupled with ridiculous wheel and tire combo, makes it practically immobile. It is a concept, is it not? And a concept should allow imagination to fly and that was what Saleem did (and rather perfectly, if I may add). Check out the exposed turbocharged boxer engine and the lack of lower rear bumper that leaves the muffler with its twin exhaust completely uncovered. Again, it may not be practical, but it looks super dope. And the red paint job there just screams ‘on to the race track’ (a super flat one, that is). Man, I just can’t get this concept out of my head.