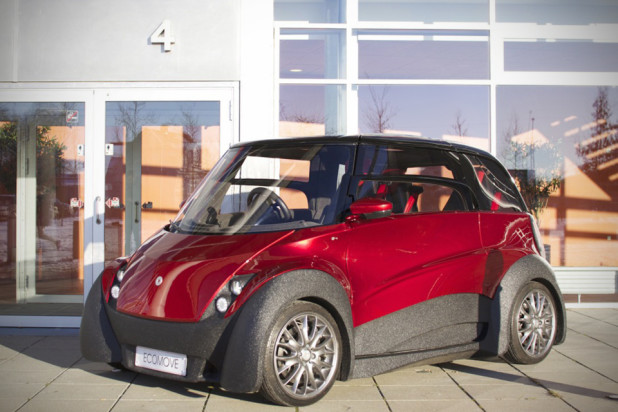 you may not have heard of Denmark-based ECOmove but their QBEAK III electric car is actually its third prototype already and is look set to roll into the market sometime in 2014. apart from performance rides, there’s a little known fact that we also have a penchant for adorable cars and the QBEAK III’s super cute form did managed to capture our hearts. measuring a compact 3-meter (9.8-foot) long, the III features an interior that is configurable to ferry from one up to six individuals and it sports removable battery pack (called energy modules) with up to six of such modules can be installed in one car, thereby offering up to 300 km (186 miles) of range. the QBEAK III employs in-wheel motors to save on space and maintenance – the motors form part of its electric driveline including brakes and suspension. two electric motors, each rated at 35.4 kW, drives this sub 500 kilograms cuties to a modest top speed of 120 km/h (75 mph). it has sliding doors in place of traditional swing doors for access, one on each sides and it sits on a unique platform where the energy modules form the floor pan. another features unique to this car (that’s if you exclude McLaren F1) is the driver position: it is located in the middle of the car, thus enabling the driver to get in and out with ease from either side. there’s no word on its pricing or availability as of now for this urban people mover but you can check out a few more images plus a clip of it in action below to quell your drooling for now.

ECOmove via The Examiner