clever it is for France-based mountaineering sports label Quechua to team up with ARCHOS to introduce the brand’s first 5-inch rugged Android smartphone, as oppose to starting out from scratch on its own. leveraging on ARCHOS’s experience in turning out Android devices, the handset stays true to the company’s ethos of all-things outdoor adventure and is designed to shrug off shock, mud, water, sand, snow and extreme cold temperatures. officially, it hasn’t have a name or model number, but you know the Domancy folks are serious about their first smartphone offering when it has a dedicated website for it and has a slew of teaser videos to support this rugged-beautiful handset.

on the rugged usability department, this ruggedized Android smartphone sports a 5-inch anti-reflection display with an enhanced backlighting technology that is said to encourage legibility under full sunlight, while a built-in barometric altimeter offers you accurate datas, altitude graph, total altitude gain/loss, ascending speed and more. however, to realize the full potential of the latter, it would required the aid of an Android app. official spec sheet include a 1.2GHz quad-core Qualcomm Snapdragon S4 processor with 1GB of system RAM, 4GB of onboard flash storage, expandable storage up to 32GB via microSD card, a 840 by 480 pixels 5-inch IPS display, a 5MP main camera with LED flash, a 2MP front-facing camera, a massive 3,500 mAh battery, Bluetooth 4.0, WiFi (2.4GHz, supports up to wireless n), 3G radios, GPS with A-GPS, plus mandatory sensors such as accelerometer and proximity sensor.

being a handset designed for serious active lifestyle, it offers 30 integrated outdoor apps (including the aforementioned Altitude app), downloadable from Google Play, in addition to the usual suite of Google applications. the Quechua Rugged 5-inch Android Smartphone is set to be available on December 5, 2013 from DECATHLON.COM, as well as in Decathlon stores for €229.90 (roughly US$312). 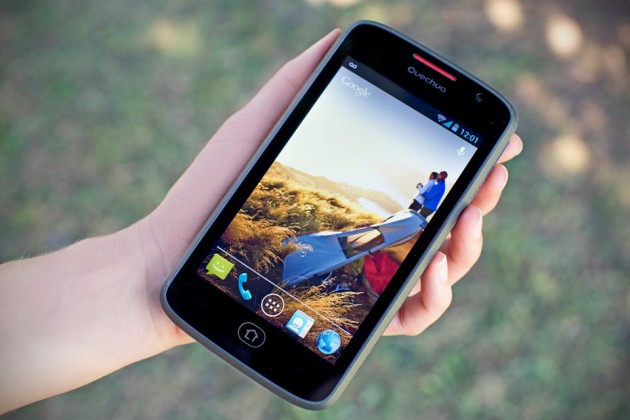