if you use propane for your grill, chances are the Refuel will be your best friend. unlike its charcoal counterpart, you will not know when the fuel is running low, unless you pick up the tank for a feel of it, but then again, that also depends on your experience and you might not get it right. that method is not even close to guesstimate, if you ask me. anyway, originally, the Refuel is a smartphone and app combo that will let you keep the propane tank level in check so you won’t be caught with an empty tank in the midst of your grilling session. your regular propane tank sits on a weight-sensing base which constantly monitor the weight to gauge the level of propane in the tank. this data is wirelessly sent to an app on your smartphone thereby keeping you in the know of the content status.

the Refuel is a project on Quirky and is in the being produced as we speak. last checked, it seems like the wireless part has been dropped in favor of the wired route which includes the same weight-sensing base and a sleek, wired indicator that magnetically attaches to the grill. actually going on the good’ol wired route kind of makes sense for such application. first of all, it makes economical sense as the indicator will probably be cheaper than making and servicing an app, and secondly, you probably won’t want to be troubled with a smartphone when you are flipping the meat. so the wired indicator is that’s needed to have the status at a glance. the Refuel will eventually retail for around 18 bucks a pop, but availability is yet to be confirmed. 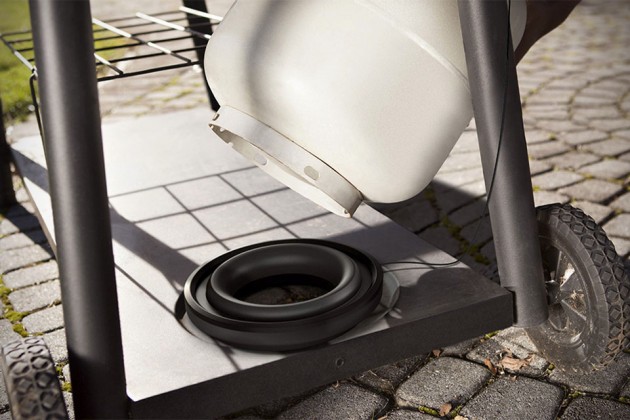