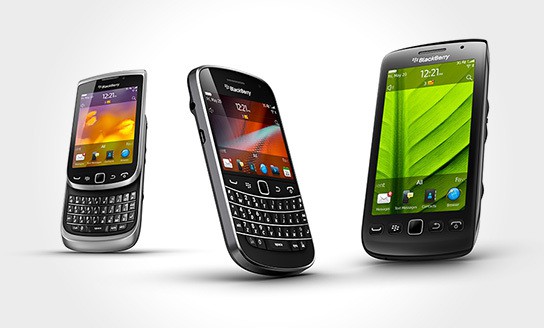 yes, RIM is very much alive and undaunted by their recent set back, they have announced plans to launch not one but five new BlackBerry smartphones powered by its BlackBerry 7 OS. the five smartphones include the new BlackBerry Bold 9900 and 9930, and the new Torch 9810, 9850 and 9860 smartphones. the Bold duo are the thinnest smartphones from RIM to date and is designed in the tradition of the BlackBerry Bold with the integration of a 2.8-inch multi-touch display. the Torch handsets, on the other hand, features large touchscreen display of 3.2-inch and 3.7-inch for the 9810 and 9850/9860, respectively. additionally, Torch 9810 features a slide out keyboard for faster typing.
[ad#Google Adsense-text-468×60]

besides the obvious design difference, the BlackBerry Bold series features a 8-GB onboard memory, but expandable up to 40-GB via the microSD card slot, while the 9850/9860 series has a more modest 4-GB onboard memory, expandable up to 32-GB via microSD card. strangely, no mention on 9810’s memory provision and to this point, i shall not speculate cos’ we shall find out soon enough. generally, the five handsets have quite a few common features like 5.0-megapixels sensor camera equipped with flash, image stabilization, digital zooming plus 720p HD video recording, GPS and WiFi. if you still believe in BlackBerry, then you’d be glad that the new BlackBerry smartphones will be available from carriers around the world starting end of August.