Modern day legendary street artist RISK continues to surprise and wow audience with this impressive shark sculpture. It does not have a name yet, or at least not that we know of. This work of art here, seen hanging in RISK’s undisclosed studio, is made up of countless scrap materials and it is HUGE. Anyways, RISK, as he explain on his Instagram page, is inspired by the various who did the same before him. He felt the need to carry on the torch lit by the people who did the same. Here are the man’s words straight from his Instagram post:

When I was a kid in New Orleans a local guy name Mr. Walter built a park over the levee on the lakefront that was made completely of found objects. I was fascinated with this I would spend hours there looking at what he created with plastic bottles, crab traps, rope, buoy’s , and other stuff that would fall off the fishing boats and wash a shore. Years later in California I was running around painting in the middle of the night and I discovered the Watts Towers. I was like oh shit Mr. Walters was here! Lol…I quickly realized it was someone else with the same spirit and vision. This sent me on a quest to build things utilizing stuff from my studio or found objects. I became very interested with the Ferus Gallery and the artists from this period. I was drawn to Edward Kienholz assemblage work. Being a Southern California based artist, I think it’s important to continue the dialogue, with the artists that paved the way before us. Much of my gallery work is referenced from the Ferus movement. My use of car and surf culture applications, and even some of the resins and epoxy’s from the aerospace industry that was booming at that time. I could go one forever but that’s another story… anyway more recently Before Ed Moses passed away, we were working on a project and I learned to address and embrace things that we are afraid of. While exploring this concept I was fascinated with Damien Hirsts Natural History series. So earlier this year I Started the series for the Beyond The Streets show. The piece took a drastic uturn as the piece became more conceptual and so much more powerful as a cop car. I still include that piece in my shark series. I was happy to be able to revisit the series with this new sculpture. The new shark was a natural progression, it scratched two important itches and let me continue the series….The sculpture will be unveiled in Montauk on Frank Mundus, home dock. Mundus was a fisherman in Montauk, New York who is said to be the inspiration for the character Quint in the movie and book Jaws …

Anywho, the yet-to-be-named shark sculpture is set to make its debut at Hero Beach Club in Montauk, New York on August 23, 2018, on the home dock of Frank Mundus. Mundus was a fisherman said to be the inspiration behind the character Quint in Steven Spielberg’s JAWS (Universal, 1975).

Here’s another look of it before it was hung up for the shoot: 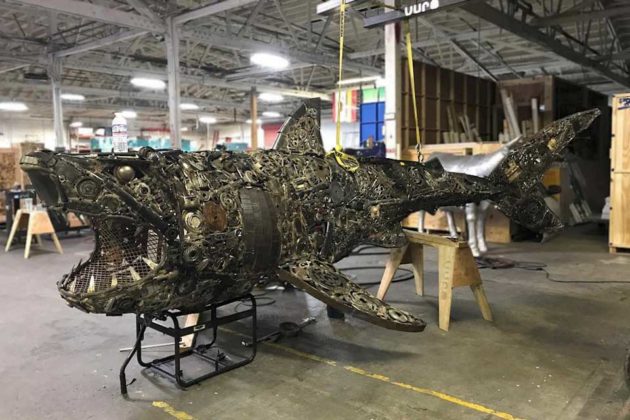